The next generation of body scanners to be rolled out in airports will literally be able to see inside the human body, as security personnel gear up to trial machines that use deep penetrating radiation, the same kind hospitals use to examine internal organs and bones. Australian airports are set to begin using the devices should legislation before Federal Parliament be passed, enabling customs officers to use technology previously only operated by doctors in controlled conditions.

The justification for the technology is to crack down on suspected drug smugglers who swallow illegal substances to evade airport security. However, the notion of placing the technology along airport security lines paves the way for its general use, particularly in light of the recent security theatre explosion we have seen in airports over the last eighteen months.

The current crop of naked body scanners being used by the TSA and other transport security personnel around the globe use either Millimeter-wave or BackScatter radiation. These devices render clothing and organic materials translucent, providing an image of what is concealed underneath, which is why they have caused such controversy.

The radiation fired from those scanners does not penetrate beyond the tissue under the skin, nevertheless there have been significant and legitimate fears expressed by experts and scientists over the safety of such devices, as far as both the operator and the traveler are concerned.

The force generated from tetrahertz waves used by the millimeter-wave scanners is small but, according to scientists, the waves can ‘unzip’ or tear apart double-stranded DNA, creating bubbles in the DNA that could interfere with processes such as gene expression and DNA replication.

Despite further warnings from scientists that the scanners will cause cancer in some travelers, it seems our governments are ready to push even further and use even more potentially lethal technology, under the guise of security.

Of course, there is a very good reason why internal X-ray scans are only legally permitted to be carried out by a doctor at a hospital or surgery – because they are extremely hazardous and can cause detrimental health effects to those exposed to them.

Radiography and Tomography scanners fire deep penetrating ionizing x-rays. The most recent studies estimated that CT scanners cause 29,000 cancers and kill nearly 15,000 Americans every year. Imagine how that number would balloon if such technology were installed in airports and used everyday on millions of healthy people, as if they were routine metal detectors.

Yet, there is every indication that this will be the case. In January 2010, following the failed underpants bombing, former European Commissioner for Justice, Freedom & Security, Franco Frattini, told the media that governments should consider scanning the insides of all travelers to make sure they are not concealing explosives or weapons. It now seems that what at the time seemed a stretch beyond the realms of sanity is actually happening before our eyes.

Recent security failures concerning the current crop of naked body scanners, many of which stem from human error, and the fact that the scanners are simply incapable of identifying some materials, will no doubt also be used as justification should the US and the UK follow the actions of the Australian authorities in attempting to beef security theatre in airports even further.

Of course, none of this matters to the scores of security contractors making fat profits from government contracts. The military industrial complex cares little if a few million people drop dead from cancer or pass on genetic defects. The only health worries they have concern their profit margins.

At the end of the day, however, the buck stops with the public on this. Overall apathy toward the rollout of highly invasive and potentially dangerous naked body scanning machines in airports, has only paved the way for more excessive violations of our rights and our liberties.

As we have consistently highlighted, there are even more frightening scenarios down the road if we continue to ignore the open tyranny being implemented all around us. If the public willingly accepts naked imaging x-ray machines that will cause cancer and death, all in the name of security, what comes next?

The TSA is considering taser bracelets that can deliver electric shocks to anyone who steps out of line inside an airport or on a plane.

Passport control officers at airports are to be phased out as new biometric face scanning cameras are replacing them under UK border control measures that came into force last year. A global biometric facial scan database is the end goal of security authorities the world over.

Other proposals include placing the cameras in every seat on aircraft and installing software to try and automatically detect terrorists or other dangers caused by passengers.

Passive brain scanners that pick up brain waves in order to sense the behaviour of travelers have already been trialed in airports. The technology known as “MALINTENT” has been developed by the Department of Homeland Security under a project lovingly called “Project Hostile Intent”. The following image is a DHS Impression of the mindreader technology in action.

We are also being incrementally taught that what goes on in the airports will be transferred to the streets, schools, shopping malls, rail stations and bus terminals.

The very body scanners we see being implemented within airports now have already been extensively trialed and are now being in railway stations in major cities.

The same technology is being considered by governments for general use in cameras on the street. Once accepted as part of everyday life in airports, it becomes much easier to sell for use in all public places.

The development of all of this nightmare technology only emphasizes the need for immediate outright rejection of the mass implementation of all forms of body screeners. If we continue to allow such gross attacks on our liberties to succeed the onslaught will never end. 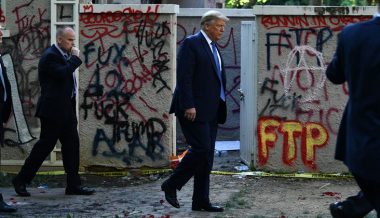