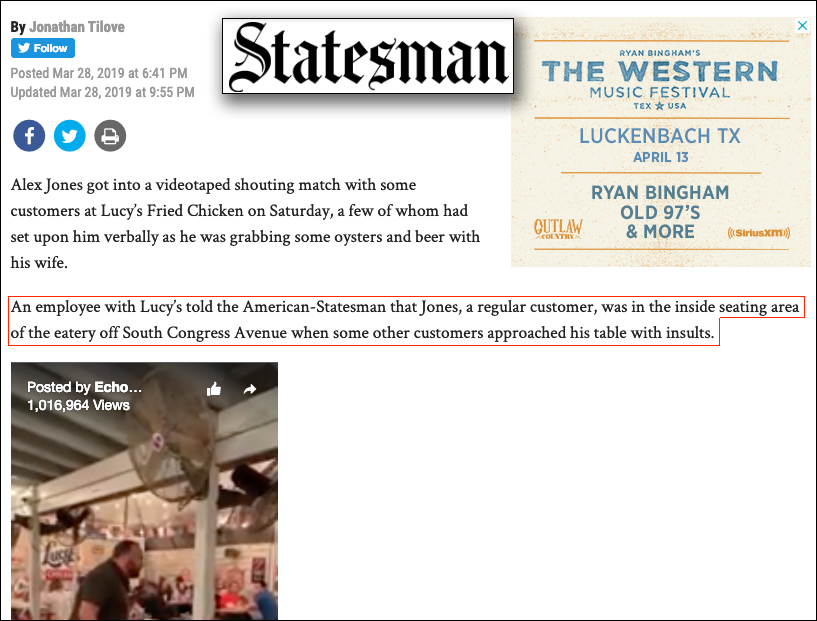 An Austin American-Statesman investigation found an altercation between Alex Jones and customers at a Lucy’s Fried Chicken restaurant began when the customers approached Jones’ table as he sat dining.

Speaking to a Lucy’s employee, The Statesman’s Jonathan Tilove discovered Jones was not responsible for initiating the confrontation which went viral over the weekend.

“An employee with Lucy’s told the American-Statesman that Jones, a regular customer, was in the inside seating area of the eatery off South Congress Avenue when some other customers approached his table with insults,” Tilove reported Thursday.

On Saturday, Jones and his wife were having oysters at Lucy’s when a group of leftists spotted and began berating him.

Videos that emerged of the event begin with Jones holding his phone up to film a group of patrons as they chant protest slogans at him.

Jones maintained the footage did not show the full context and was deceptively edited.

“They baited me like a matador does with a bull and then when I open the door, they’re all waiting with their cameras going and then edited it deceptively, because it didn’t look right because showing them chanting obscenities at me would have ruined their narrative,” Jones told Infowars.