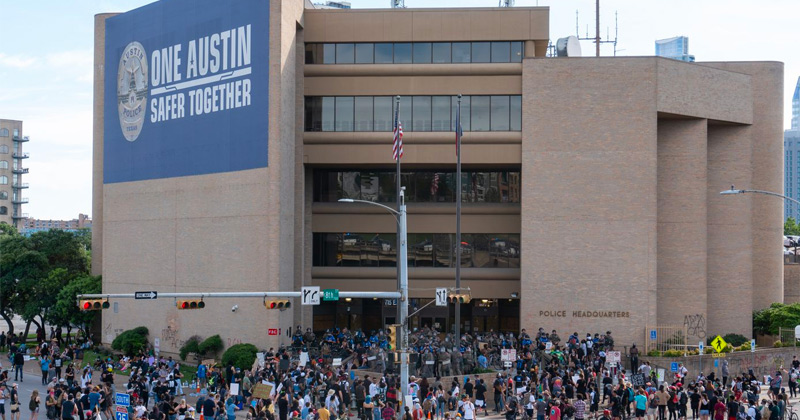 A radical new budget proposal by the Austin, Texas, City Council calls for a controlled demolition of the police department’s current headquarters in a symbolic gesture towards Black Lives Matter and defund police protesters.

“We should expedite the demolition of the APD Headquarters by directing the City Manager to move all remaining APD staff out of the existing headquarters building and into other underutilized city facilities,” reads the proposal submitted Monday by Council Member Jimmy Flannigan.

The existing APD property, prime real estate situated in the heart of Austin, would then be used to highlight black inequity and support the black community, the proposal states.

“That property… should be dedicated to addressing historic economic inequities in the black community and supporting future black community economic success,” states Flannigan’s proposal. “A community-led effort should be initiated to determine the specifics on how such a valuable property could be leveraged, and possibly serve as a gateway to East Austin.”

According to the proposal, the demolition would be accompanied by a restructuring which would turn over control of patrol and all other divisions to civilians chosen by the mayor and city council.

“This could shift more than $90 million from under the control of sworn leadership to civilian leadership and allow for each department to have separate metrics and oversight, thereby creating a way to shift organizational culture and drive outcomes,” reads Flannigan’s proposal essentially defunding the police.

One issue being highlighted by Austin residents is that the new proposal would also turn the Austin bomb squad, which was instrumental in taking down a serial bomber in 2018, into a citizen-run department.

It was not that long ago…Austin’s Bomb Squad was out to the test with the “Austin Bomber”. If the council gets its way …citizens will need respond to those calls on their own. As noted below… @LesliePoolATX @JimmyFlannigan @MayorAdler @GregCasar pic.twitter.com/hHNcGrM8Ys

Question for @LesliePoolATX, if the @Austin_Police team that responds to 911 calls regarding explosives and suspicious devices found throughout the city and surrounding areas is cut, who would Austinites call to deal with those?#APDbudgetthoughts pic.twitter.com/sJI2hyGKs8

The proposal follows the election of a new Travis County District Attorney whose campaign was largely funded by the Texas Justice & Public Safety PAC, a political action committee that was funneled over $650,000 by billionaire globalist George Soros.

This also follows a pattern by the left to dismantle police nationwide, as exemplified in other leftist cities such as Minneapolis and Seattle where city councils have caved to Black Lives Matter and “defund the police” protests.

Owen and Frank Cavanaugh talk about the recent news about American police walking out of the job and go over what is coming next for American cities.