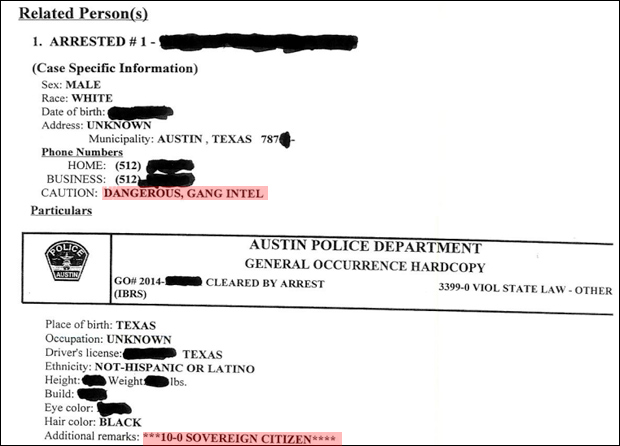 The Austin Police Department is classifying an Infowars contractor as a “sovereign citizen” and gang member, in line with rhetoric disseminated by the Southern Poverty Law Center, after he attempted to challenge improper application of Texas traffic laws.

An arrest record obtained by Infowars shows that APD considers the technician to be gang affiliated and a member of the sovereign citizen movement, despite him never having been convicted or arrested on a gang related charge, nor self-identifying as a sovereign citizen.

The contractors’ arrest record inexplicably contains notes warning officers that he is a “DANGEROUS” individual even though he has no history of violence.

Under “Additional remarks,” one of Austin’s finest has also added “10-0 (caution) SOVEREIGN CITIZEN.”

The document reveals how local police departments are bending to the “domestic extremist” narrative promulgated by the FBI and the SPLC, which demonizes nearly all citizens who peacefully challenge laws as dangerous, cop-hating “sovereign” revolutionaries hellbent on anarchy.

In this case, the Infowars technician’s challenge of the improper application of traffic laws, a simple, non-violent challenge within the court system, prompted local authorities to inappropriately brand him a “sovereign citizen,” considered by the FBI to be one of the “nation’s top domestic terror threats,” according to CBS News.

The erroneous notes also endanger the Infowars contractor’s life. During casual encounters the labels can be seen by other officers, who might maintain an offensive posture and treat the situation with a higher degree of apprehensiveness.

In the past, similar attempts have been made by Austin cops to equate peaceful activists with extremists.

Last year, a senior APD officer attempted to align Austin activist groups with the “national ‘domestic extremism’ trend,” saying that the pro-freedom groups, including Oath Keepers, were part of “A nationwide movement [that] has begun against the United States Government.”