Members of the Austin Police Department trained alongside Texas Army National Guard troops at Austin’s Camp Mabry yesterday, learning various military tactics they say will help them be better prepared for the next Ford Hood.

“In light of recent events, the Fort Hood shooting, the Navy yard shooting, These are all incidents that strike home the importance of being ready and prepared,” Lt. Colonel Les Davis told Fox News Austin.

News crews were allowed to witness “a few of” the drills within the facility, which includes outside wooded “rural terrain,” where armed APD stormtroopers decked out in SWAT attire swarmed hallways clearing several rooms, all the while absorbing training methods intended for military personnel. 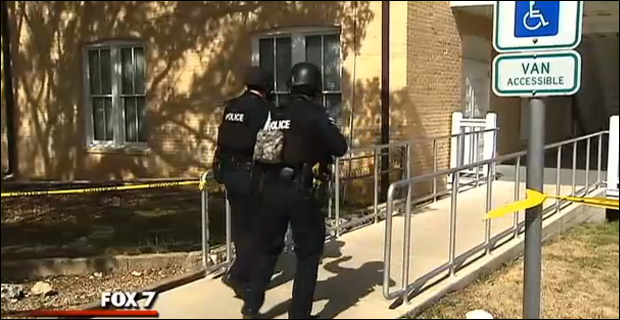 “An opportunity to work with the Austin Police Department gives us the chance to learn how they train. We teach them how we train and we use this opportunity to practice the techniques we would use should we have a real incident on post,” Lt. Col. Davis told Fox News.

This was the first time officers trained with National Guard service members, but APD wasn’t shy to tell all about how they were learning military combat tactics designed for warfare. 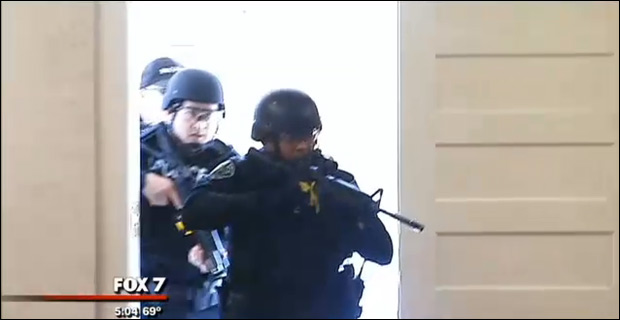 “Every time we work with the military I think we both come away winners,” APD Assistant Chief Steve Deaton expressed, adding, “We use them to help teach our CAST team [Counter Assault Strike Team] small unit tactics.”

The niggling fact news crews were only allowed to view “a few of the drills” in Austin begs questions as to what other types of drills were carried out. 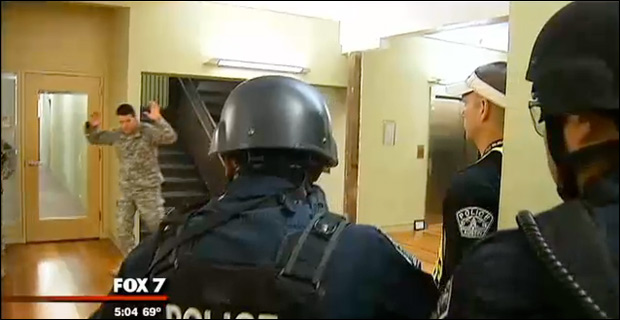 While on the surface the training seems innocent enough, similar preparations taking place countrywide are stoking fears that federal, state and local law enforcement agencies are training to take on the American people in the event of mass civil unrest.

Last month, we highlighted the military’s $96 million “fake city” located in Virginia, purportedly built for use in different combat training scenarios. Though the Army didn’t specify a particular training purpose, the city contained a school, a bank, and a subway station whose trains bore “the same logo as the carriages in Washington DC,” according to the London Telegraph.

Previous training drills conducted well within residential and urban areas, as well as strange acquirements of hollow point ammo and military vehicles, have also given rise to speculation that the federal government is indeed preparing for some type of unspeakable fallout which will require large volumes of trained personnel.

Last year, former Navy SEAL Ben Smith told Fox News the Obama administration was carrying out a litmus test on its top officers with the main focus being whether they would be prepared to order NCOs to fire on Americans.

Similarly, retired U.S. Army Captain Terry M. Hestilow expressed last year that he felt the Obama administration was preparing for a “coup” against the people, and labeled the DHS’s appropriation of weapons a “bold threat of war” against US citizens.

For years, Infowars has been at the forefront of exposing secret Army training plans, such as the “Civil Disturbance Operations” document for Military Police which outlined how to quell domestic riots, confiscate firearms and even kill Americans, as well as manuals detailing “re-education camps” and “resettlement operations” which contained plans for pacifying “political activists,” in addition to highlighting solicitations seeking out “Internment/Resettlement Specialists” to work in “civilian internee camps.”

No particular crisis has thus far presented the opportunity for a vigorous clamp down, but with economic insolvency, the looming threat of a new cold war, the ratcheting up of the war on gun rights and dependency on the government at all time highs, it’s not difficult to fathom the tipping point may be right around the corner.