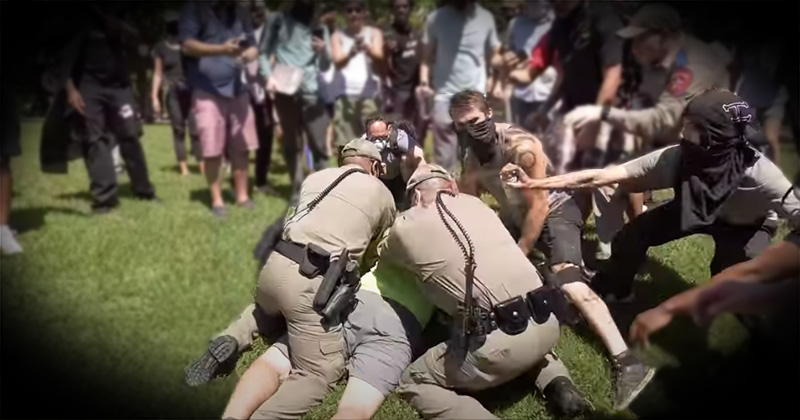 Footage coming from protests in Austin, Texas over the past few days proves the demonstrations were not as peaceful as we are being told.

While rioting and looting have taken place once the sun goes down, as seen in cities across the country, the narrative in Austin is that the daytime protests are completely tranquil.

In the video, a “protester” carrying an Antifa flag can be seen damaging police vehicles, as well as “protesters” assaulting police, spray painting them in the face, attacking random vehicles and each other.

Much of the anti-cop rhetoric being spread in the city focuses on a 16-year-old boy who was shot in the face with a beanbag round for what appears to be no reason whatsoever.

Video doesn’t provide context as to whether or not the young man did anything to warrant being hit with the “less lethal” round, but the incident appears to be an unprovoked attack.

The teen, Brad Levi Ayala, is “recovering and stable,” but will be recuperating for some time, according to family.

Along with the injury Ayala sustained, two other incidents dominated local news.

A 20-year-old man was shot in the back of the head and a pregnant woman named Saraneka “Nemo” Martin was struck in the stomach, both by “less lethal” rounds.

“I’m crushed. I’ve cried a few times today,” Austin Police Chief Brian Manley said. “This was two very young people that we believe are from our community, but regardless, that are right now fighting for their life and seriously injured. That is not what we set out to do as a police department.”

Manley added, “And I would ask that the community in both of these incidents, if you have any video that you captured — because I know a lot of people were recording — please bring that to us so that we can include that in our review of these incidents.”

Touching on the injury to “Nemo” Martin, Manley explained, “I know there’s another incident where we have a African American female, pregnant female, that has reportedly been struck with an impact munition to her belly, and that investigation is ongoing, as well.”

These events are not as black and white as many people make them out to be.

For example, a group called the Mike Ramos Brigade, a self-described militant organization, used Facebook to plan the looting of a local Target store.

An Antifa group was also involved in the Target looting, as Texas Department of Public Safety Director Steve McCraw said, “We’re even aware of, in terms of May 31st, protest and looting of Target in Austin. That was done and organized by an ANTIFA web page and of course the surveillance that was provided over the internet identifying where law enforcement resources were staged was done over ANTIFA accounts.”

This proves outsiders looking to disrupt Austin’s protests likely blended in with the crowd and took part in the attacks on officers.

Some protesters may have been injured despite being peaceful, but the police were also pelted with rocks, bottles, spray paint while mobs of demonstrators swarmed.

In total, fifteen officers were treated for minor injuries and one officer had to receive stitches.

There is blame to be placed on both sides and neither is perfect, but one thing is clear: Americans need to come together before it’s too late.