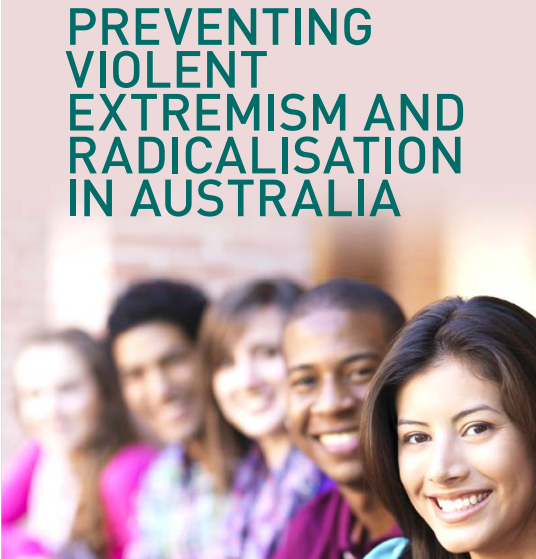 The Australian government is fighting back against the unrelenting terrorist threat that threatens to consume every Western nation. It, too, has noticed that youngsters and their SnapChats are particularly prone to radicalization from outside forces. As Richard Chirgwin of the Register points out, it has chosen to address this threat to Australian society in the way only a government agency can: with a blend of the bizarre and the tone deaf.

Launched this week by justice minister Michael Keenan (who also glories in the title Minister Assisting the Prime Minister on Terrorism), the Radicalisation Awareness Kit is supposed to help school teachers identify which of their students is going to enter the adult world with a penchant for bomb-throwing.

The 32-page booklet starts with a long definition of radlicalization, hedged by warnings that not every diversion from the mainstream will result in violence. Then it heads into a series of “case studies” that indicate every deviation from societal norms is a warning sign of impending unlawfulness.

The case studies are the best kind of hilarious: inadvertent.

“Erin” joined a “hate group” and committed crimes against Muslims. After a stay in jail and laying off the booze, “Erin” turned her life around. Not completely, but it’s a start.

It is now a number of years since she left the group and Erin has sought treatment for her depression, reconciled with her family, is studying and has made some new friends. However, it was a difficult and slow process. She has moderated her beliefs significantly and makes a point of educating herself on issues rather than just accepting what others tell her. She does not entirely trust the government or police yet – it takes a long time to change some habits of thinking.

If nothing else, this fabricated tale shows the government to be overly-concerned about its place in the world. “Erin” is still partly broken because she doesn’t “entirely” trust the government or police. What a shame. But it is hoped “Erin” will be made whole in the near future — full of trust in the government and prone to only tempered beliefs.

But that’s not the worst of it. Much like the Homeland Security Advisor’s ridiculous claim that teens acting like teens pose a threat to national security, the Australian government’s concerns about future radicalization are also tied to the hallmarks of adolescence.

As Richard Chirgwin points out, the radicalization anecdotes reach their nadir with the story of “Karen,” starting with setting these ground rules for Normal Existence.

Karen grew up in a loving family who never participated in activism of any sort.

This is called foreshadowing. Karen soon deviates from her family’s path of loving do-nothingness.

When she moved out of home to attend university Karen became involved in the alternative music scene, student politics and left-wing activism.

And there you have it: alternative music is the gateway drug to terrorism. As is politics, oddly enough, considering this narrative has been written by a political agency. And let’s not forget the activism — the kind of thing her normcore family never felt compelled to participate in.

One afternoon Karen attended an environmental protest with some of her friends. It was exhilarating, fun and she felt like she was doing the ‘right thing’ for society. She enjoyed spending time with this crowd. Over the next six months Karen progressively dropped out of university in order to live full-time in a forest camp, where she remained for a year. Her family were confused and disappointed and stopped supporting her financially.

You can guess what happened next. Logging operations were screwed with, Karen was arrested multiple times and, finally, she became disillusioned with her radical brethren and sistren. She chucked it all for a staid job at a “mainstream environmentalist organization.” Happy endings all around, especially for Karen, who now realized the only way to fight the system was to become part of the system.

She now thinks illegal or aggressive direct-action campaigns only produce short-term solutions, and she is much more interested in working towards developing a sustainable solution using the legal system.

The warning signs the government says to look for are basically A Day in the Life of a Teen.

Issues that can help push someone onto a path of radicalisation may include:

• changes in living or employment
• anxiety, depression, paranoia, suicidal thoughts or other mental health issues
• personal issues such as health problems, addiction, anger or social problems
• dropping out of school or university
• negative changes in friendships and/ or personal relationships
• confrontations with family members
• discrimination and social unfairness
• exposure to hateful attitudes and actions, either as victim or perpetrator, and
• overseas events that may harm their community.

Now, the report does go on to caution that these are normal and don’t necessarily signify Early Onset Radicalization. However, the report does make it clear — especially through its anecdotal evidence — that these can lead to radicalization when combined with activism, alternative music and an apparently unearned distrust for the government.

Perhaps sensing the sort of response this document might generate, the hefty propaganda leaflet also makes an effort to assure Australians that ASIO (the MI5/FBI of Down Under) is not allowed to crack down on radicalization warning signs — at least not without going through the pre-lubed proper channels.

There are concerns that ASIO has extraordinary and unaccountable power. A review by the Independent National Security Legislation Monitor has found that ASIO’s powers have been used appropriately and effectively, with no evidence of abuses. As at November 2014, ASIO has not used its powers to detain anyone at all, and has used its questioning powers only 16 times since 9/11.

BUT OF WHAT YEAR?

These questionable anecdotes notwithstanding, the document takes a fairly restrained look at radicalization and its causes. But the nuances of its more cautious wording are undercut by stories that equate trusting your government and steering away from activism with normality, not-so-subtly suggesting any deviations from the norm should be viewed with suspicion.