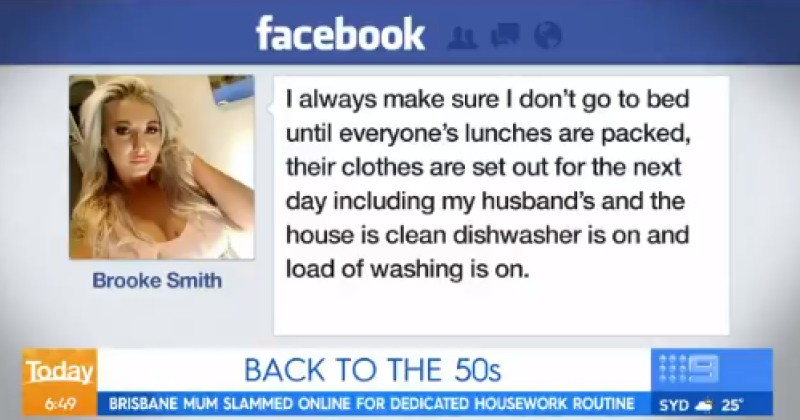 A mother of four in Australia has apparently been “slammed” for a Facebook post in which she said she liked to get up early and make breakfast for her husband.

I know, the sheer temerity of it, right?

“I always make sure I don’t go to bed until everyone’s lunches are packed, their clothes are set out for the next day including my husband’s and the house is clean dishwasher is on and load of washing is on,” Brooke Smith posted on Facebook.

“I always get up early (4:30 with husband to make his breakfast and coffee),” she added.

Smith’s story was introduced on an Australian TV show by the female host saying, “I want to take you back to the 1950’s.”

The host then acknowledged that Smith had received some “praise” online.

“Who? Who are these people?” responded another male host, adding, “Has he hypnotized her or something? Who does this stuff? Making his breakfast and then putting his clothes out…is he disabled or something?”

“Seriously, get a grip, get off your bum and do stuff yourself,” he continued.

A female guest on the show then suggested that Smith, God forbid, “might actually like” taking care of her four children and husband.

“I mean, I like my husband but make your own bloody breakfast,” responded the female host.

A moment of honesty then crept in at the end when she admitted Smith was “making the rest of us look bad.”

Apparently, the husband and wife couple in question also breed bulldogs and run MMA classes, so she’s hardly a damsel in distress.

“Having a clean house and being a good mom is SoOoOo 1950s,” commented one respondent. “These people hate you and want your families destroyed.”

“I do the exact same for my husband it’s a choice!!!” remarked former Olympic athlete Jess Schipper.

I do the exact same for my husband it’s a choice!!!

Meanwhile, behaving like a “trad wife” is now being labeled as an act of “white supremacy.”

who needs youtube rabbit holes when you have the BBC broadcasting literal white supremacist propaganda pic.twitter.com/DMNIdq4eH5

Running alongside what could be mistaken for a peculiar style of mommy-vlogging is a virulent strain of white nationalism. Who are these women? They call themselves tradwives. https://t.co/0zeVeepBo4

No wonder the west is literally dying out because no one is having babies anymore.