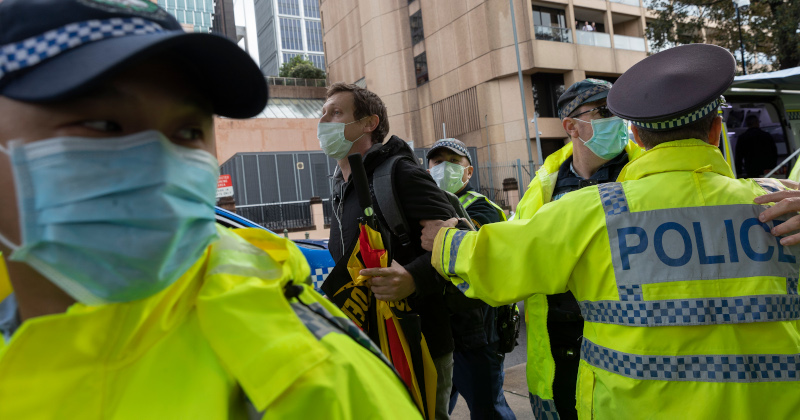 Police in Sydney arrested the leader of an anti-racism protest and five others before the event even got started Tuesday.

The gathering was deemed illegal by courts due to the threat of spreading the coronavirus. Organizer Paddy Gibson was among six people arrested in a park known as The Domain before the rally was supposed to begin at noon local time.

New South Wales state Assistant Police Commissioner Mick Willing said Gibson and the other protesters were issued with fines of 1,000 Australian dollars ($710, €605) for breaking pandemic crowd restrictions. As Gibson was taken away by police, he told protesters to disperse to avoid arrest. The area was cleared just before the rally was scheduled to begin.

Down to public safety

Reports indicate police heavily outnumbered protesters on Tuesday in Australia’s largest city. Some estimates said there were 50 protesters compared to 400 police officers, far fewer than were initially expected to attend. Outdoor gatherings were limited to 20 people in the state. Willing said shutting down the protest was an issue of public safety.

“We are not anti-the-right-to-protest. This is about public safety,” said Willing. “We understand that the issues that are in question here are significant and are sensitive to a lot of people. However, we must do what we can to ensure that the public in general are safe at this time.”

Australia reported its highest ever increase in new coronavirus cases on Monday following a spike of cases in the neighboring state of Victoria.

Gibson told Australian broadcaster Nine Network before the rally that “we all must be COVID-safe, but we need to stand together to…say that Black lives matter in Australia.”

The march was called to highlight the deaths of Aboriginal people in custody, building off of the momentum of the Black Lives Matter protests taking place around the world following the death of George Floyd in Minnesota two months ago. There have been several protests against police brutality and Indigenous people’s deaths in Australia since May.

But New South Wales Premier Gladys Berejiklian warned that Sydney was at a tipping point in the pandemic, where there have been several infection clusters.

“We’re appealing to people’s consciences to say now the law says you shouldn’t be out there…please think of a different way to express your views,” said Berejiklian before the rally was supposed to begin.

According to John’s Hopkins University, there have been 15,304 confirmed coronavirus cases and 167 deaths in Australia. There have been more than 7,000 new cases since July began.

The country on Monday reported its highest ever daily increase in cases after a flare-up of infections in Victoria. New South Wales, of which Sydney is the capital, is also battling to contain several virus clusters.