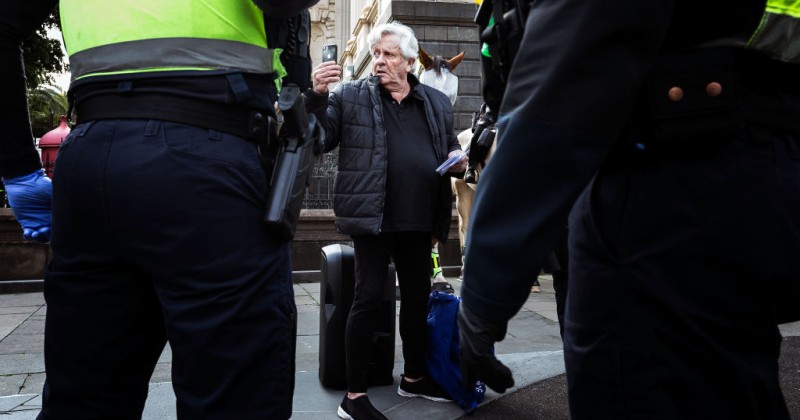 Following the controversial arrest of a pregnant woman over a Facebook post, police in Australia defended the move and said they had paid over 80 home visits to people warning them they will be arrested if they attend anti-lockdown protests.

28-year-old Zoe Buhler was handcuffed and arrested in her Ballarat home in front of her children yesterday because she used Facebook to organize a ‘freedom day’ anti-lockdown protest in her home town.

Authorities claimed they were “satisfied” that police had acted reasonably and Buhler was charged under section 321G of the state’s Crimes Act 1958.

However, the president of the Victorian Bar, Wendy Harris QC, said she was concerned about the arrest.

“In the case of Ms Buhler, who was arrested and handcuffed in her home in front of her partner and children, the Bar is concerned that the enforcement action of the police … appeared disproportionate to the threat she presented,” she said.

“The Victorian Bar is concerned that the enforcement response to Ms Buhler’s conduct is apparently at odds with other reported and more measured responses by authorities to organisers or promoters of similar protests planned or carried out in contravention of public health directives.”

Harris was likely referring to Black Lives Matter protests, which haven’t been met with the same consequences.

Authorities responded by absurdly claiming that BLM had been allowed to organize protests because they had promised police they would maintain groups of no more than 10 people spaced 100 meters apart, something which clearly didn’t happen.

Police commissioner Luke Cornelius also revealed that officers had visited more than 80 people in the state of Victoria warning them they will be arrested if they attend any anti-lockdown protests this weekend.

“If you do take the selfish option and leave home to protest, we’ll be ready for you,” said Cornelius.

“We have hundreds of police ready to respond, including our general duties and specialist police, such as the public order response unit, mounted branch and the highway patrol. They’ve all been rostered and will be deployed to support this operation.”

As the video below highlights, Australian police have also been caught on camera numerous times physically assaulting people in the street for not wearing masks.