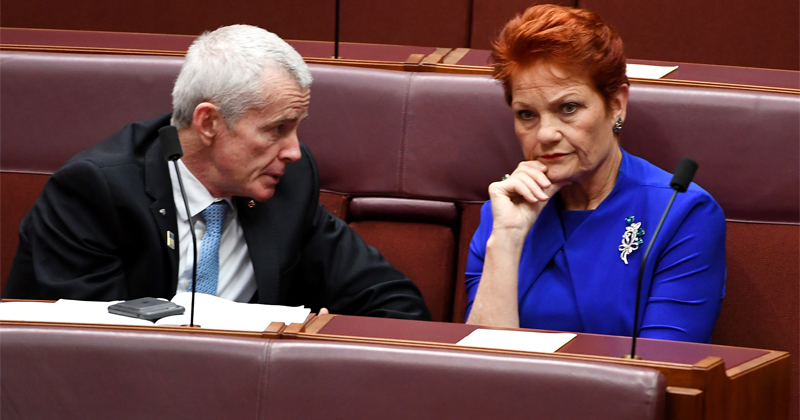 Australian politician Pauline Hanson sparked controversy over her remarks on George Floyd–the suspected fraudster who was killed by police after an officer knelt on his neck for nine minutes–calling the deceased Minneapolis man “criminal and a dangerous thug.”

Last weekend, tens of thousands of people demonstrated in Australia for Black Lives Matter following the in-custody killing of Floyd, according to The Daily Mail.

On Wednesday, Hanson, The One Nation Leader, addressed the Australia Senate to condemn the man who sparked international protests–and riots.

She said: “George Floyd had been made out to be a martyr. ‘This man has been in and out of prison numerous times. He was a criminal and a dangerous thug.”

Floyd had reportedly moved to Minnesota from Texas to start afresh after a bout of criminality in his early adulthood.

Hanson, slamming the protests, went onto say: “It sickened me to see people holding up signs saying ‘black lives matter’ in memory of this American criminal.

“I’m sorry, but all lives matter… we cannot allow bleeding hearts and those on the left to destroy the fabric of our society and our freedom.

“No one could possibly condone the way in which George Floyd died. But what upsets me is the attitude of many people – black and white.”

In the UK, Prime Minister Boris Johnson suggested the protests should not be backed as they would likely end in violence–something which was proven yesterday as patriotic protesters were attacked by pro-BLM supporters, with one stabbing caught on camera.

In recent weeks, the media has pushed a narrative to inject energy into the Black Lives Matter protests around the world. A few publications described the counter-protesters as far-right thugs for protecting historical statues from vandalism.

Far-left London Mayor Sadiq Khan condemned the actions of the patriotic counter-protesters, tweeting: “Millions of Londoners will have been disgusted by the shameful scenes of violence, desecration and racism displayed by the right-wing extremists who gathered in our city today.”

Millions of Londoners will have been disgusted by the shameful scenes of violence, desecration and racism displayed by the right-wing extremists who gathered in our city today.

In the face of attacks and abuse, our police did a fantastic job to control the situation. Thank you.