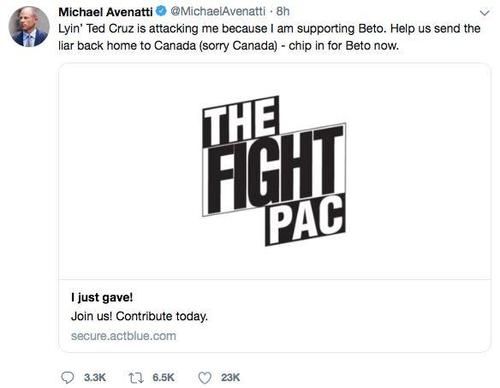 Attorney Michael Avenatti has come under fire over a now-deleted tweet encouraging people to “chip in for Beto now,” linking to what appeared to be a fundraising page for Texas Democratic Senate candidate Beto O’Rourke.

In the fine print of the now-deleted campaign, however, O’Rourke supporters discovered that half the proceeds went to Avenatti’s Fight PAC, formed a little over seven weeks ago.

Users were able to manually allocate funds entirely to O’Rourke, however the default sent half of all money collected to Avenatti’s Political Action Committee. 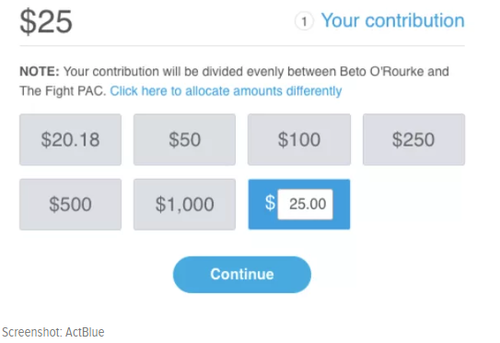 “‘It is pretty skeezy,’ said Brendan Fischer, the director of federal and FEC reform programs at the Campaign Legal Center, of the fundraising tactic. ‘If Avenatti wanted to raise funds for Beto O’Rourke’s campaign, he could just share a link to the Beto for Senate donation page. But he didn’t. Avenatti’s tweet gave viewers the impression their donation would support Beto for Senate, and given how easy it is to make a one-click donation through ActBlue, some viewers could miss the fine print disclosing that their donation would be split with Avenatti’s PAC.” – Daily Beast

Avenatti called the criticism “complete nonsense,” noting that Senators Elizabeth Warren and Kamala Harris “do the same thing.” Perhaps sensing he’d made a huge mistake, Avenatti deleted the page – telling the Daily Beast in a text message: “It wasn’t worth the nonsense that resulted from people that don’t understand how common this is.”

The left was not pleased:

“The spotlight-stealing lawyer, who also represented Stormy Daniels, is responsible for drawing the media’s attention to Julie Swetnick, an alleged victim of Kavanaugh who told an inconsistent and unpersuasive story. Swetnick’s wild accusation provided cover for fence-sitting senators to overlook the more plausible allegation leveled by psychology professor Christine Blasey Ford, and to declare that Kavanaugh was being subjected to false smears.

Indeed, in her speech announcing her decision to vote for Kavanaugh, Collins explicitly made note of Swetnick’s allegation, which she described as ‘outlandish.’

‘That such an allegation can find its way into the Supreme Court confirmation process is a stark reminder about why the presumption of innocence is so ingrained in our American consciousness,’ Collins said.

Sen. John Kennedy (R–La.) echoed Collins, telling MSNBC’s Chuck Todd, ‘I think this process changed dramatically when Mr. Avenatti entered the picture. I think a lot of people, including many of my Democratic colleagues, felt like we had gotten into the foothills of preposterous.'”

Seems like there’s big money in Beto, although that was before he was seen dabbing in public…