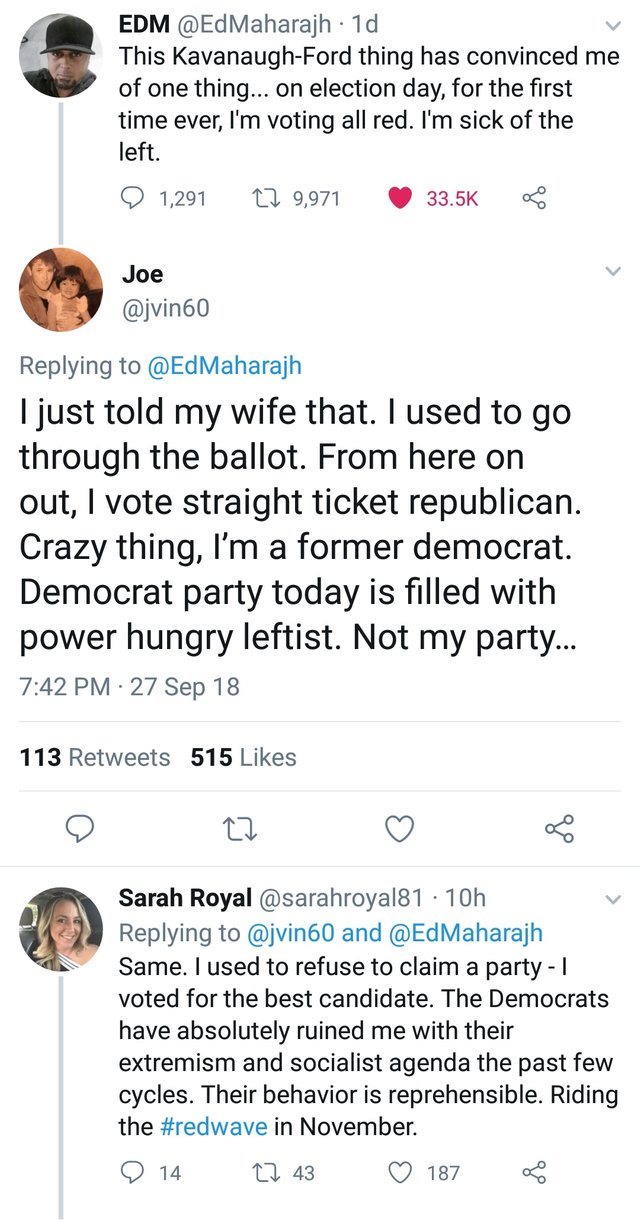 The Brett Kavanaugh Senate Judiciary show trial chaos Thursday forced voters who align with the Democrat political spectrum to reconsider their allegiance to the party.

My husband has been a life long Democrat while I’ve been a Republican. When Hillary Clinton ran for president, my husband walked away! He said he was going to change his political affiliation to Independent. After today’s hearing, he is changing to Republican! #winning #walkaway

As of today, I no longer identify as a Democrat and will no longer put my support behind this party that smears and attacks decent people for having an opposing point of view and using victims of violent crime as pawns for political chess. I want no part of that. #WalkAway

@JeffFlake I was a democrat my entire life! I have never despised a party like I currently do our democrats….I speak for the majority of America..#ConfirmKavanaughNow Yet, another disgusting display..

I'm a son of a lifelong democrat and union worker. I've voted democrat, Never again. The democrats are a disgrace and disgusting. We must defeat Senator Warren and remove all democrats. They will destroy this great country.#DefendOurMen #HimToo @SenWarren @realDonaldTrump

No my parents, registered democrats have sworn to never vote democrat again! My mom was in tears watching Judge Kavanaugh and her words, "I have two sons, this could be either of them" #walkaway

Reformed Democrat here! Voted 2 times for Obama before my eyes were opened. Changed my party 2 days ago!

I agree. The Democrats are not the party they used to be. I certainly will never vote for one again until they stat putting Americans first.

Yep. I’m an independent swing voter and there’s no way I’m voting democrat in the near future. It’s not in any American’s best interest to vote for these people. They’re power hungry, crazed, and bent on destroying every facet of American life.

I did the same thing! I rarely voted in midterm elections and didn’t vote party lines. This year I won’t be home for elections but made sure I requested my absentee ballot, declared myself a republican and will vote for all GOP candidates. Disgusted by the last 2 weeks

Yeah I voted mostly democrats but not this year.

One anonymous Hispanic Democrat writing for TheFederalist.com described he disliked President Trump, but said the Kavanaugh debacle has forced him to recant his previous political affiliations.

“I am a college-educated, suburban, first-generation Latino immigrant. I voted for President Obama in 2008 and 2012. I find President Trump to lack the basic moral character that we should expect in our political leaders and did not consider, even for a moment, voting for him in 2016. After watching how Senate Democrats and the media handled the nomination of Brett Kavanaugh, however, I will be voting Republican in 2018 and for Trump in 2020,” a man using the pseudonym Tomas Mendoza wrote.

Others, disgusted by Dems’ treatment of Kavanaugh, were thankful they left the party when they did:

Actually my Democrat husband is a #WalkAway. He came to his senses and is a Republican now. Thank God. I 😉

For 20 years I was a registered Democrat, I changed my affiliation, and very carefully made the change I may add. @walkaway #Walkaway

Yep it’s all a stunt. #Soros A money grabbing stunt at the expense of an Innocent man! #JudgeKavanaugh. #Democrats are despicable. What happened to the party i once knew, or were they always like this and I was blinded? So happy I ran away! #WalkAway! This is a political travesty

I feel so sorry for what your doing to America this should have come out months ago u should have been honest with her ur party is disgusting glad I left it will never vote for a DEMONCRAT again #KAG #WALKAWAY 🇺🇸🇺🇸🇺🇸🇺🇸🇺🇸🇺🇸🇺🇸🤬🤬 #SAVEUSA pic.twitter.com/hySVRfspGl

I have always voted Democrat. I had to re-register to vote and was proud to say I am now Republican.

Did that in 2016 for the first time. Welcome brother.

I feel your frustration. Coming from Chicago where the swamp plug is & with ALL the democrats that run the city, county & state doing NOTHING for years for the Black community, I left the party a while back. What DO we have to loss supporting @POTUS @realDonaldTrump #GOP3

Thank you! I used to be Democrat so i still do understand why people vote that way because what’s best for one family is not always best for the next. But this using sexual assault as a political ploy is disgusting and doubt it’s helping the party like they think.

Any man in that position, being tried with no real evidence, would do the same. I think it is shameful and the absolute worst I have ever seen from the democrats. I use to be one. https://t.co/1lhNFqsoHw

As an independent I will never ever vote for a democrat EVER!!!!!

#WalkAway is a movement started by former Democrat Brandon Straka which supports and encourages members of the Democrat party who feel disillusioned by its antics to switch parties.

Leftists Have Radicalized The Democratic Party To Dominate America