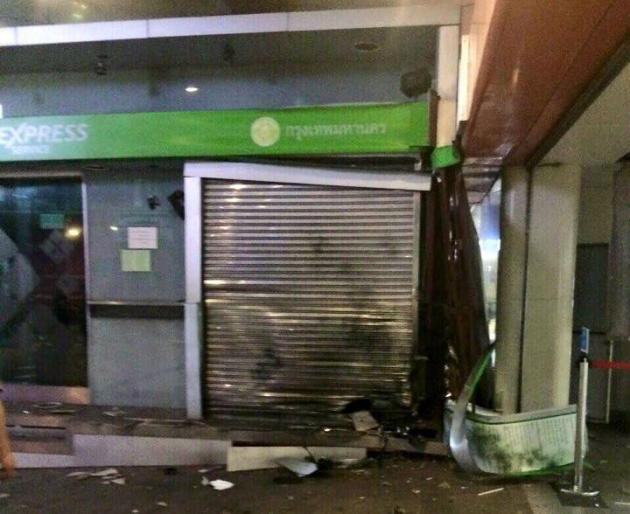 In the wake of the recent Bangkok bombing, the BBC in its report, “Bangkok bomb: Deadly blast rocks Thailand capital,” manages to write paragraph after paragraph without so much as mentioning once ousted dictator Thaksin Shinawatra’s name, nor mentioning the abhorrent violence carried out by his political front in an increasingly desperate bid to cling to power before ultimately being ousted in 2014.

The BBC was exposed amid Thailand’s 2013-2014 anti-Shinawatra protests during which it regularly spun or covered up violence carried out by Shinawatra’s supporters, and intentionally misrepresented demonstrators, Now it’s journalists and analysts have weighed in on who it is suspected was behind the Monday evening bombing – and their conclusions – echoed by other Western media outlets – give us the best clues yet as to what challenges Thailand truly faces.

The BBC’s omission of Thaksin Shinawatra is significant. Reading the BBC’s article, an unsuspecting reader would be left unaware of the campaign of terrorism and mass murder Shinawatra and his followers carried out to such an extent, that the at the time, the BBC itself reported a “civil war” was imminent.

In 2009, Shinawatra’s mobs, after having carried out isolated attacks and murders up norther against Shianwatra’s political opponents, began rioting and looting in the capital of Bangkok. Two shopkeepers were gunned down by Shinawatra’s supporters – the only two to die during the violence. The following year, Shinawatra would deploy 300 heavily armed militants in Bangkok, triggering weeks of gunfights in the capital’s streets with the Thai army, leaving nearly 100 dead and many more wounded.

More recently, during mass protests that finally led to Shinawatra’s ouster, Shinawatra would again deploy heavily armed militants to carry out grenade and small arms attacks – leaving over 30 men, women, and children dead and hundreds more injured. Attacks were almost nightly until the military finally seized control in May 2014.

Since May 2014, several bombings have been carried out, some following immediately after direct threats made by Shinawatra’s political front.

The BBC’s sidestepping of these facts is done intentionally to exclude Shinawatra as a plausible suspect. Considering the mass murder and terrorism he and his political movement have used in the past, it would seem Monday’s bombing was the next logical step in a calculated escalation. In addition to scale and impact domestically, the bombing is expected to target and hit hard Thailand’s tourism industry, an objective Shinawatra and his Western backers have been attempting to achieve since the coup in 2014 through a concerted propaganda campaign.

Undoubtedly the bombing serves America and their proxy’s best interests – but to what extent were Shinawatra’s own terrorist networks involved? Does the US possess the operational capacity to use other actors in Thailand to carry the attacks without directly involving Shinawatra’s notorious networks?

Instead of mentioning Shinawatra’s previous atrocities and potential role in the recent bombings, the BBC article attempts to suggest another possible suspect. The BBC’s proposal is not far fetched. Thailand’s south has been the scene of a violent insurrection since Shinawatra first took office in 2001. What the BBC never explains, however, is who is behind the insurrection, and who is using it as cover for other acts of terrorism.

There is no previous history of attacks in the Thai capital on this scale or with such murderous intent. One possibility is that they might be the work of Malay-Muslim insurgents in the south who have been fighting Thai rule for more than a decade. However, they have never targeted Bangkok before and casualties from their attacks have been falling.

National political turmoil has prompted some low-level bomb attacks by rival factions in the past – but again, nothing on this scale. There also seem to be few, if any, links between Thai militants and groups like the so-called Islamic State.

The shrine is popular with Chinese tourists and this raises at least the possibility of a connection to the Uighurs – a Turkic-speaking Muslim minority in the far west of China. They complain of cultural and religious persecution at the hands of the Beijing authorities.

Last month more than 100 Uighurs were deported from Thailand to China – a move that prompted widespread condemnation. But while there are violent elements in the Uighur movement, an attack on this scale outside China would be unusual to say the least.

The BBC never mentions that the Uyghurs being trafficked through southern Thailand were on their way to fight in NATO’s proxy war in Syria. Many were wanted by Chinese authorities as suspected terrorists – and their return to China was vocally protested both by the US and its various human rights advocacy fronts. Reuters in their article, “Uighurs ‘on way to jihad’ returned to China in hoods,” reported that:

Some of the Uighurs deported to China last week from Thailand had planned to go to Syria and Iraq to carry out jihad, state television said, showing pictures of them being bundled out of an aircraft with black hoods over their heads.

The incident the BBC and Reuters mentions, the deportation to China of some 100 Uyghur, culminated in an attack in Turkey upon Thailand’s consulate. The group attacking the consulate was the US State Department-funded World Uyghur Congress (WUC). Reuters again would report, this time in their “Thai PM defends decision to send Uighurs back to China,” that:

“We are here to protest Thailand’s and China’s human rights abuses. The Chinese cruelty has spread to Thailand,” Seyit Tumturk, vice president of the World Uighur Congress, told Reuters outside the Thai Embassy.

WUC’s US funding can be seen via the US National Endowment for Democracy (NED) page titled “Xinjiang/East Turkistan” – East Turkistan referring to the fictional state separatists are attempting to violently seize from Chinese territory with US backing. 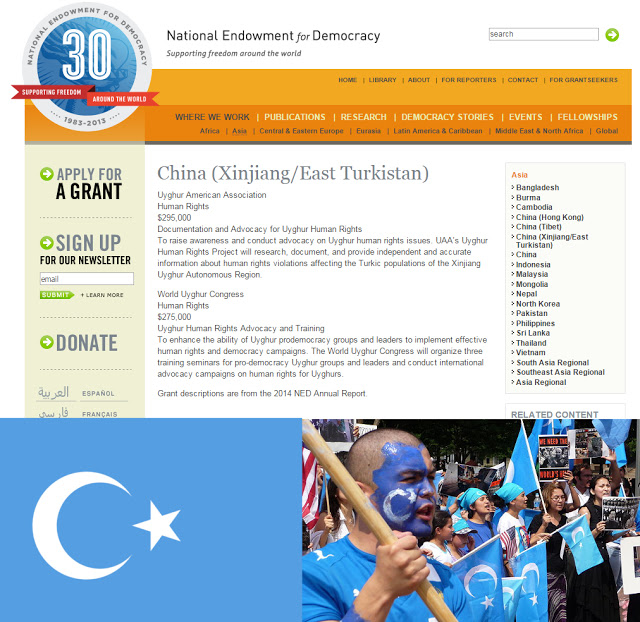 It is clear then that Uyghur terrorists, both in China, and fighting NATO’s proxy war in Syria, are extensions of America’s and NATO’s growing militant network – meaning that their Uyghur staging point in southern Thailand is at least using the ongoing violence there as cover – if not an integral component of the violence.

Of Saudi support for Jemaah Islamiah specifically, the New York Times in their article, “Saudis Quietly Promote Strict Islam in Indonesia,” would report:

A Saudi charity, Al Haramain, provides a good example of this dual role. Three years ago it signed a formal memorandum of understanding with the Indonesian Ministry of Religion that allowed it to finance educational institutions.

But Al Haramain also appears to have served as a conduit for money to Jemaah Islamiyah, a Southeast Asian terrorist organization that aims to build Islamic states in the region.

And while the US reacts quickly to pressure Saudi Arabia to shut down these networks when they are exposed, the vast interconnected interdependencies between the US and Saudi Arabia are innumerable and impossible to ignore.

It is often acknowledged across even the Western mainstream media that Saudi Arabia is a notorious state-sponsor of terrorism, including the terrorists allegedly behind the September 11, 2001 attacks that left 3,000 Americans dead. Despite this, the US has had a decades-long, deep economic and military relationship with the despotic Arabian autocracy.

The US maintains permanent military bases inside Saudi Arabia and along its peripheries to defend it, funds the Saudi military, and in 2010 concluded the largest arms deal in US history with the Saudis. Additionally, Saudi Arabia’s brutally repressive internal security apparatus is a creation of US advisers and operators.

The Saudi royal family and the elite amongst the US corporate-financier Fortune 500, have maintained deep financial and political ties as well. Saudi Arabian corporate-financier interests (run by the royal family) are tied directly to Wall Street and London via conglomerations like the US-Saudi Arabian Business Council and representation upon the JP Morgan International Council (Khalid Al-Falih of Saudi Aramco, amongst the highest valued companies on Earth).

This also includes the Bin Laden family, whose multi-billion dollar Saudi Binladin Group is an active member of the US-Saudi Arabian Business Council and plays a central role in deciding bilateral policy for the benefit of collective US-Saudi corporate-financier and corresponding geopolitical interests. At one point, the Bin Ladens and the Bush family sat around the same table, as both families were involved in the equity firm, Carlyle. In fact, Bush and Bin Laden family members were clicking champagne glasses together in Washington on 9/11, an event that would make both families immensely rich in the coming decade.

How US-Saudi Terrorism Works in Thailand

It is likely that Saudi Arabia has no serious intentions of creating an Islamic State in Thailand. Terrorists it cultivates in Southeast Asia are used specifically as a geopolitical tool for the West to use when conventional means are impossible to employ. The United States would clearly benefit by using Saudi-backed terrorists in southern Thailand to target the Thai economy while keeping their political proxy – Thaksin Shinawatra – clear of being implicated in horrific bombings like that on Monday.

By using terrorism under the guise of a spreading southern insurgency, bolder attacks could be engineered without the risk of provoking or providing justification for the Thai public or the Thai military to move against Shinawatra and his allies.

Previous bombings after the coup, were carried out at critical junctures as the Thai military moved to uproot Shianwatra’s political party. While the bombings were meant to look like the work of southern insurgents, the timing, motive, and suspects all ultimately led back to Shinawatra with a grenade attack on the Criminal Court building leading directly to Shinawatra’s own cousin.

Thailand’s enemies have clearly raised their war upon the Thai people to a grisly new level. Whether it was the US-backed regime of Thaksin Shinwatra directly, or terrorists the US and Saudi Arabia have cultivated in Thailand’s southern-most provinces, the blasts on Monday were designed to terrorize the Thai people, target Thailand’s economy, and strain relations and goodwill between China and Thailand.

It was clearly not the work of “terrorists” alone. The attack was planned and carried out to achieve – not the localized separatist ambitions allegedly behind the violence in the south – but with geopolitical ambitions even the BBC finds difficult to ignore.

With the appointment of Glyn Davies as US Ambassador to Thailand, a War College graduate specializing in the use of non-military force to exact from a nation the will and interests of the United Sates, the ugly specter of intensified irregular war in Thailand was all but inevitable. As in Libya, Syria, Egypt, and Ukraine where proxy war has become the geopolitical tool of choice, so too in Thailand it appears the US is pursuing a more “muscular” foreign policy.

To combat it, Thailand must look to other nations successfully facing and defeating similar threats. Russia and China in particular understand and have formulated defenses against this form of fourth generation warfare. Russia in particular is perfecting tools in the media to help better inform both its own population and the world of this new threat. Thailand must also inform the Thai public of the true threat they face and what must be done to defeat it.