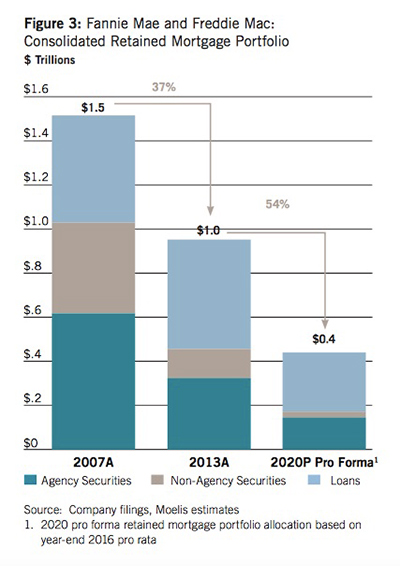 Editor’s Note: As we previously reported, the Obama administration was looting profits from Fannie Mae and Freddie Mac to illegally fund Obamacare.

WASHINGTON, D.C. – The “Blueprint for Restoring Safety and Soundness to the [Government Sponsored Enterprises] GSEs” plan developed by New York investment bank Moelis & Co. to privatize Fannie Mae and Freddie Mac promises to increase the value of common shares, as Infowars.com has previously reported to an estimated $9.62 – $13.15 per share by 2020, as the two mortgage giants recapitalize.

To achieve this goal, the Moelis plan assumes the GSEs will implement a capital regime that would include the imposition of both overall leverage limits and risk-based capital calculations that take inspiration from the type of capital regulations placed by federal regulators, including the FDIC, on commercial banks since the 2008 crisis.

Thus, the Moelis plan offers to increase shareholder value not only by increasing the market capitalization of the two GSEs from some $15 billion today to somewhere between $207 – $238 billion at the end of 2020, but also by applying to the GSEs significantly enhanced capital standards broadly consistent with the capital requirements demanded by federal regulators for other financial institutions since the 2008 economic downturn.

As illustrated in Figure 3 of the “Blueprint,” under the Moelis plan, the GSEs would reduce their investment portfolios from over $1.5 trillion pre-crisis to $0.4 trillion by year-end 2018, eliminating from the consolidated retained mortgage portfolio the subprime mortgage securities and other high-risk mortgage assets that were largely responsible for the losses Fannie and Freddie incurred during the crisis.

Currently, the GSEs guarantees back the approximately $5 trillion market for GSE mortgage-backed securities and agency debt.

The need to begin recapitalizing the GSEs now was appreciated by Mel Watt, the FHFA director, who explained to the Senate Banking Committee in his testimony given May 11, 2017, that  he intends to exercise his legislative authority under the Housing and Economic Recovery Act (HERA) to discontinue at the end of the second quarter of this year.

In addition to the “hard capital,” raised in the Moelis Blueprint through a combination of public market offerings of newly-issued common and preferred stock, as well as retained earnings and the conversion of some or all the $33 billion in existing junior preferred stock into common stock (analogous to Tier 1 capital under bank regulatory frameworks), the GSEs can access two additional sources of “soft” capital capable of achieving the risk transfer necessary to decrease risk to taxpayers.

The two “soft capital” financial tools available to the GSEs identified in the Moelis Blueprint are the following:

“By recognizing all available sources of capital, safety and soundness can be achieved by 2020 without changes to the prevailing mortgage market infrastructure,” The Moelis Blueprint comments on page 8.

“The ultimate goal is to ensure that Fannie Mae and Freddie Mac are dramatically de-risked and de-levered by the time the conservatorship concludes,” the Blueprint continues. “After building capital, the then-outstanding common shares of the GSEs can be transformed into modest dividend-yielding stocks that can attract a deep private investor base in the public capital markets, especially in this era of low interest rates and dividend yields.”

This capital plan is designed to provide the GSEs the capital required to meet the more rigorous capital requirements in two key ratios: the leverage ratio and the risked-based capital ratio, described as follows:

The leverage ratio is a fraction whose numerator is the total amount of capital (“hard” Tier 1 capital plus “soft” capital” in the form of CRTs and/or reinsurance), with a denominator of the total assets held by the GSEs.

The risked-based capital ratio is a fraction whose numerator is once again the total amount of capital (“hard” Tier 1 capital plus “soft” capital” in the form of CRTs and/or reinsurance), with a denominator of the assets considered at risk (as defined by the FHFA as a 50 percent risk-weight-average of total mortgage assets held by the GSEs).

Pre-crisis the GSEs were subject to minimum (core) capital requirements of 0.45 percent on the mortgage guarantee portfolio, plus 2.5 percent on their on-balance sheet loans and securities.

Under the conservatorship, these requirements were suspended, with the result core capital has fallen to $43 billion as calculated by the Federal Housing Finance Agency (FHFA), an amount Moelis considered “woefully inadequate,” resulting in less that 1.0 percent of total asset values.

As seen in Figure 4, the Moelis Blueprint targets that by 2020, core capital at $167 billion plus CRT capital at $97 billion will total $264 billion, enabling the GSEs to hit targeted leverage ratio requirements of 3.0 percent of total assets, and 5.0 percent of total assets when credit risk transfer outstanding to third-parties is included in the calculation of capital. 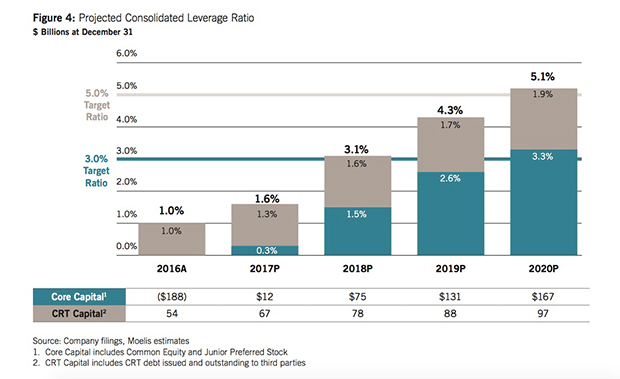 The Moelis Blueprint further targets to hit by 2020, the target 8.5 percent ration of capital to risk-weighted assets or 3.0% to 3.5% of total balance sheet assets (including unfunded guarantees).

The Moelis Blueprint aims to be unique in its feasibility, laying out “a clear path to build safe and sound levels of capital in less than four years at the GSEs using existing legal authority,” based on detailed financial projections and analysis, establishing a reference point for discussions of capital requirements, corporate valuation and profitability projections, along with a government exit timeline.

In conclusion, the first Infowars.com article on the Moelis Blueprint demonstrated that those current common stock holders wanting to liquidate their stock positon can anticipate almost immediately the opportunity to sell at appreciated share prices, while those able to hold their stock until 2020 will also be able to enjoy the resumption of dividends generated by well-capitalized GSEs, positioned for profitable operations going forward.

This article further demonstrates that those current stockholders seeking to hold shares should draw comfort the Moelis Blueprint, if implemented, offers a workable methodology to manage GSE mortgage portfolio risks with capital ratios that will bring Fannie Mae and Freddie Mac safely within the guideline ratios established by federal regulators for major commercial banks.

From a perspective of public policy, the Moelis Blueprint ensures the continuation of the 30-year fixed-rate mortgage essential to first-time homebuyers.

By preserving the 30-year fixed-rate mortgage, the GSEs will continue to provide affordable housing to middle-income and working homeowners, with a capital structure that will ensure stability in the approximately $5 trillion market for GSE mortgage-backed securities and agency debt – benefits shareholders should expect to realize in predictable dividends and stable increases in share prices.