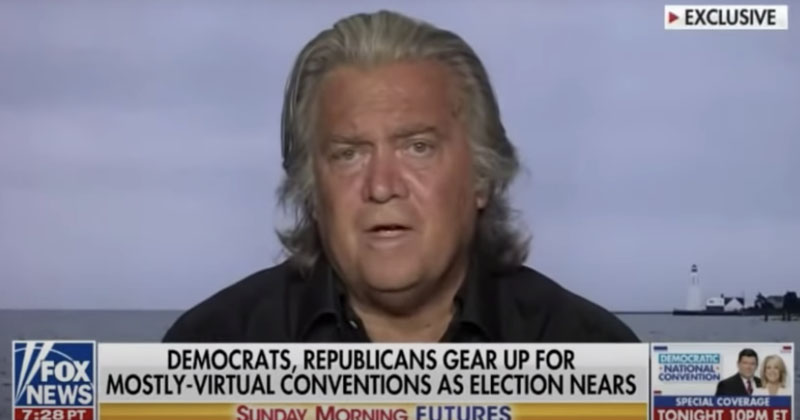 Former White House chief strategist Steve Bannon in a Sunday interview said that Democrats want the “death and destruction” of America’s economy and way of life.

“I think this week is going to be great for the Trump campaign and the RNC [Republican National Committee] and the White House to let the American people see exactly what the [Democratic] policies are,” Bannon told Fox News anchor Maria Bartiromo, referring to the upcoming Democratic National Convention.

“[Democrats] want the death of the American economy and the destruction of the American way of life, and I think if that’s highlighted by the end of the week, it’ll smoke Joe Biden out of his basement.”

Bannon noted that far-left figures like Alexandria Ocasio-Cortez (D-N.Y.) and Sen. Bernie Sanders (I-Vt.) being keynote speakers at the Democratic National Convention will serve to help Trump highlight the stark ideological differences between his campaign and Biden’s.

“I think this is perfect for President Trump,” Bannon said.

“In fact, if I was the campaign or the RNC, I would amplify the messages coming out of this convention and here is why: President Trump won in ’16 because he stood up for America, he stood up for working class and middle class people against a financial and political elite that was driving the managed decline of the United States, and you’re going to see it over the next four days.”

Democrats in contrast are advocating for the complete opposite platform, Bannon said.

“[Democrats will be] talking about more globalization, more economic devastation, now coupled with this kind of undergirding of this cultural Marxism and anarchy of Antifa and certain elements of the Black Lives Matter,” he continued.

The DNC kicks off Monday and will run until Thursday, with prominent Democrats like Michelle Obama, Govs. Andrew Cuomo (N.Y.) and Gretchen Whitmer (Mich.), and Sanders to speak on the first night of the virtual event.

Biden wants 3 months of mandatory masks declared by Governors – “it’s patriotic”. Is it different than what Trump said last week? Both parties lock us down and put us on an allowance.