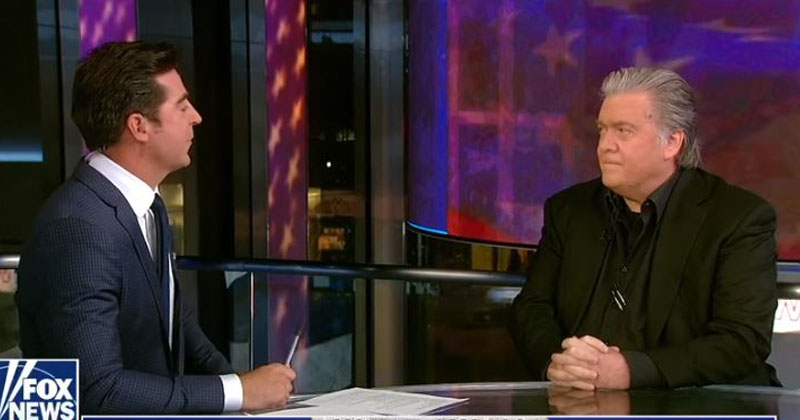 Stephen K. Bannon told Jesse Waters that Sen. Lindsey Graham, (R-S.C), chairman of the Senate Judiciary Committee needs to do the very important work of helping President Donald J. Trump to protect the office of President by exposing the impeachment hoax with a trial in the Senate.

“We need to see the abuses against Donald Trump, before the Nation,” Bannon said.

“It is the total destruction of Donald Trump, that is what their [Democrats] focus is,” Bannon said.

Bannon has long been passionate about his defense of Trump against a corrupt Democrat party, and who he calls the “permanent government class”.

Waters played a video of Bannon talking about impeachment threats to Trump, in 2017 at CPAC, and Bannon talked about his 2018 movie, Trump At War, warning people that the Democrats were going to focus on nothing but Impeachment.

Bannon proved, with credibility, that he has seen the long game since Trump was elected.

“They are not going to stop. Now they are talking about going after Bolton, and that is why I wanted a long trial or to [now] get Lindsey Graham to get all of this out on the table,” he said.

Bannon wants a Senate investigation and trial, and also the removal of government employees who refuse to support Trump’s America first policies.

“He [President Trump] needs to clean house. He needs to get people in there who support his policies to execute this,” Bannon said.

“The concept of Donald Trump and the Deplorables triggers the left,” Bannon said, hinting that exposing the permanent government class is still a worthy pursuit of his time, even though he left the White House to fight for Trump from outside.

“This is about future presidents, and the office of president, not just about President Trump. That is what he [Trump] is saying,” Bannon said. “President Trump is saying we need to vett this and that is why he needs the Senate Judiciary to get started. You start with Rudy Giuliani and let him have two days in a formal setting and let him put up all of the information he has up there for everyone to see.

This impeachment charade has blown-up in the Democrat and Neocon faces, but it doesn’t end there.