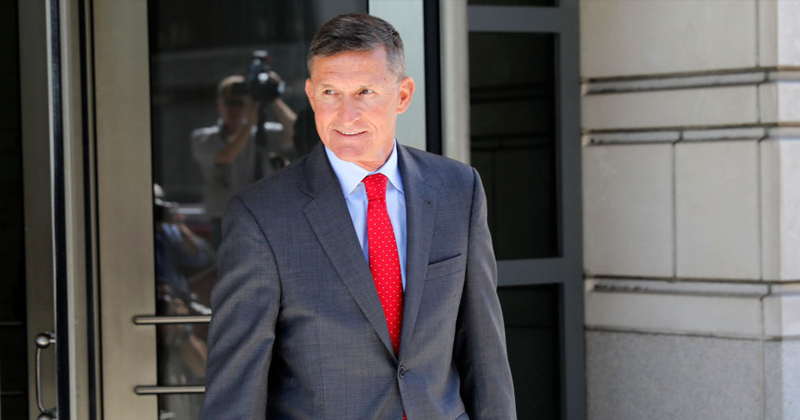 A week of two-tiered legal shenanigans was capped off on Friday with a New York Times report that Attorney General William Barr has assigned an outside prosecutor to scrutinize the government’s case against former Trump national security adviser Michael Flynn, which the Times suggested was “highly unusual and could trigger more accusations of political interference by top Justice Department officials into the work of career prosecutors.”

Notably, the FBI excluded crucial information from a ‘302’ form documenting an interview with Flynn in January, 2017. While Flynn eventually pleaded guilty to misleading agents over his contacts with the former Russian ambassador regarding the Trump administration’s efforts to oppose a UN resolution related to Israel, the original draft of Flynn’s 302 reveals that agents thought he was being honest with them – evidence which Flynn’s prior attorneys never pursued.

His new attorney, Sidney Powell, took over Flynn’s defense in June 2019 – while Flynn withdrew his guilty plea in January, accusing the government of “bad faith, vindictiveness, and breach of the plea agreement.”

In addition to a review of the Flynn case, Barr has hired a handful of outside prosecutors to broadly review several other politically sensitive national-security cases in the US attorney’s office in Washington, according to the Times sources.

Of particular interest will be cases overseen by now-unemployed former US attorney for DC, Jessie Liu, which includes actions against Stone, Flynn, the Awan brothers, James Wolfe and others. Notably, Wolfe was only sentenced to leaking a classified FISA warrant application to journalist and side-piece Ali Watkins of the New York Times – while prosecutors out of Liu’s office threw the book at former Trump adviser Roger Stone – recommending 7-9 years in prison for process crimes.

Earlier this week, Barr overruled the DC prosecutors recommendation for Stone, resulting in their resignations. The result was the predictable triggering of Democrats across the spectrum.

According to the Times, “Over the past two weeks, the outside prosecutors have begun grilling line prosecutors in the Washington office about various cases — some public, some not — including investigative steps, prosecutorial actions and why they took them, according to the people. They spoke on condition of anonymity to discuss the sensitive internal deliberations.”

The moves amounted to imposing a secondary layer of monitoring and control over what career prosecutors have been doing in the Washington office. They are part of a broader turmoil in that office coinciding with Mr. Barr’s recent installation of a close aide, Timothy Shea, as interim United States attorney in the District of Columbia, after Mr. Barr maneuvered out the Senate-confirmed former top prosecutor in the office, Jessie K. Liu.

Mr. Flynn’s case was first brought by the special counsel’s office, who agreed to a plea deal on a charge of lying to investigators in exchange for his cooperation, before the Washington office took over the case when the special counsel shut down after concluding its investigation into Russia’s election interference. -New York Times

What’s next on the real-life House of Cards?

Robert Barnes, BarnesLawLLC.com, looks at the now criminal investigation of the origins of the DeepState coup attempt and the likely legal outcomes of the cases against Julian Assange, Roger Stone and General Flynn.