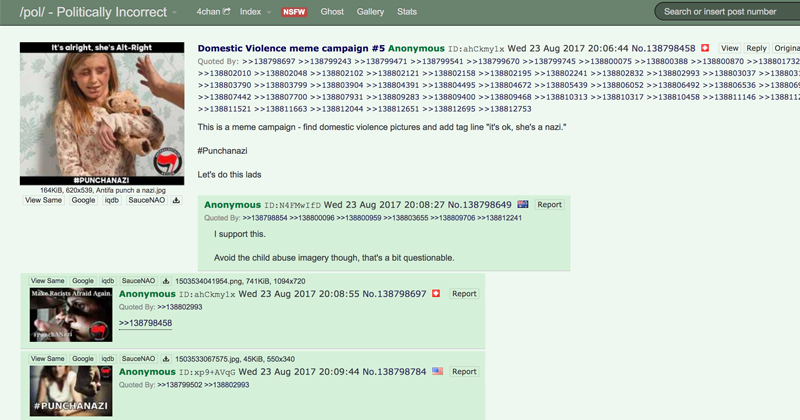 The BBC is claiming a “far-right smear campaign against Antifa” was “exposed” by “investigative researchers,” but the campaign was publicly viewable to anyone browsing the popular imageboard 4Chan.

It seems that simply visiting 4Chan is what the mainstream media now considers “investigative” journalism.

The memes spread on Twitter and drew the attention of the BBC which published an article Thursday morning claiming the campaign was “exposed” by an “online investigation.”

Well, no sh*t. Literally anyone could have figured that out because the 4Chan thread about the campaign was not only popular, but was also publicly viewable.

“This wasn’t designed to be a false flag… it was literally designed to be media bait so they’d spread it for us,” wrote one 4Chan anon. “The Trump strategy. Works every time.”

“They don’t need to believe Antifa actually posted this… They just need to know that there’s a thread on Reddit from January where they actually espoused these beliefs, which shows up when you google search about it.”

He’s likely referring to a Jan. 27 post on Reddit which seems to advocate violence against the far-left’s political opponents, or perhaps he’s referring to this extensive list of far-left redditors calling for violence.

The BBC’s “investigative research” also claimed Infowars’ “Joseph Paul Watson” helped promote the campaign, but a quick look at the Infowars Contributors page shows no one with that name.

Ironically, the BBC tried to give Eliot Higgins credibility by claiming he “exposed” the use of chemical weapons by the Syrian government back in April, but the attack was first reported by the White Helmets, an al-Qaeda affiliated group funded by George Soros and the British government.

“A day prior to the attack, Gulf-based Orient TV announced ‘Tomorrow we are launching a media campaign to cover the airstrikes on Hama country side including the usage of chemical warfare against civilians.’ This shows clear foreknowledge that the rebels were going to stage an attack by Orient TV,” reported independent Syrian journalist Mimi Al-Laham. “The White Helmets filmed much of the footage being released on the chemical attack.”

“They have also been known to stage ‘rescue’ videos in the past.”

The BBC’s reporting is a good example of how the mainstream media has abandoned real investigative journalism in favor of pushing a preconceived narrative that often contradicts known facts to the benefit of the elites.

“Consequently, the media’s focus is not on relating the specifics of a particular event, and then allowing the reader to come to his own conclusions. Instead, the focus is on appealing to the opinions of those in position of power, and filtering all events through this lens, as to let the consumers of media know how they should think,” wrote the Mises Institute’s Ryan McMaken. “Bias is not the only factor at work here, though. The excessive reliance on reliable and predictable “expert” sources stems from a need to constantly invent new news stories for broadcast and publication — and from a general laziness among publishers, editors, and journalists themselves.”

“Traditional journalism requires true investigation and compilation of a variety of messy and disorganized facts. It’s much easier, however, to simply call up a politician or an expert and create the facts by eliciting a “newsworthy” opinion from an important person.”