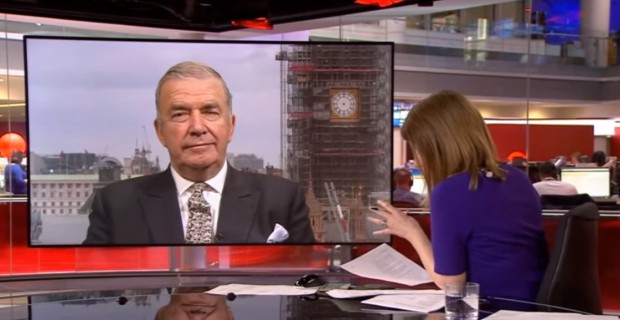 In an extraordinary exchange, a BBC News host told a former Navy Admiral that he shouldn’t question the motivation behind military intervention in Syria because “we’re in an information war with Russia”.

Admiral Lord West expressed doubt that the alleged chemical weapons attack which led to air strikes on Syria was actually carried out by Bashar Al-Assad’s regime, asserting it “doesn’t ring true” and asking “what benefit is there for his military?”

“We know that in the past some of the Islamic groups have used chemicals, and of course there would be huge benefit in them labeling an attack as coming from Assad,” he added.

After questioning the impartiality of evidence presented by groups like the White Helmets and the World Health Organization, West revealed that he had been put under pressure before to lie about war.

“I had huge pressure put on me politically to try and say that our bombing campaign in Bosnia was achieving all sorts of things which it wasn’t. I was put under huge pressure, so I know the things that can happen,” said West.

The BBC’s Annita McVeigh then made the stunning suggestion that West shouldn’t be truthful and shouldn’t question the narrative behind the attack on Syria because his words might help Russia.

“Given that we’re in an information war with Russia on so many fronts, do you think perhaps it’s inadvisable to be stating this so publicly given your position and profile, isn’t there a danger that you’re muddying the waters?” she asked.

In that moment, McVeigh basically let slip that the BBC is just as biased as RT or any other Kremlin controlled outlet when it comes to acting as a propaganda mouthpiece for the state.

West replied: “I think the answer is, if there’s a real concern, let’s face it, if [Assad] hasn’t done it then that is extremely bad news. If Assad hasn’t carried out the attack, I think it’s just worth making that clear. I think our government’s policy towards Assad has not been clever since 2013.”

The former head of the British Armed Forces Jonathan Shaw echoed West’s concerns when he told Sky News last week that Assad had no motivation to carry out chemical weapons attack, before being abruptly cut off.

Former head of British Armed Forces says Assad had no motivation to carry out chemical weapons attack, promptly gets cut off by Sky News host.

It seems that there’s a definite split between former top brass and current legacy media talking heads when it comes to propagandizing for further intervention in the Middle East.

Have BBC and Sky News hosts been given instructions to dismiss any questions about who really carried out the chemical weapons attack?