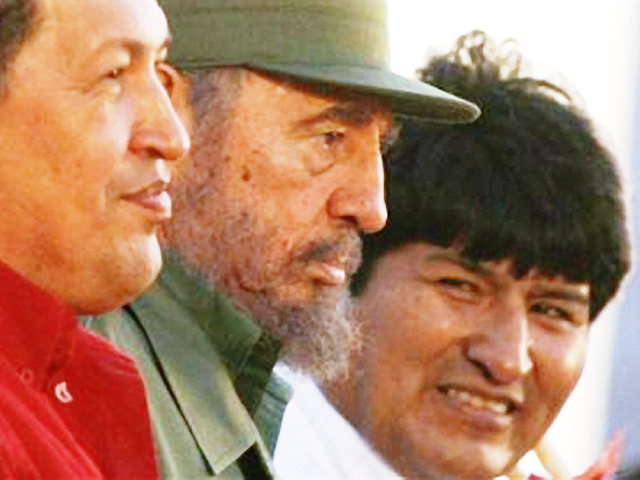 Since inaugurated in February 1999, he’s faced open US hostility, including by go-along major media scoundrels.

President Mahmoud Ahmadinejad’s visiting “some of the United States’ most ardent critics: Venezuela, Nicaragua, Cuba and Ecuador.” Chavez “is Mr. Ahmadinejad’s most vociferous ally in the region.” Central University of Venezuela Professor Elsa Cardozo said his visit gave Chavez a chance to “project his own style and radical message. His core supporters are very radical and he doesn’t want to lose them.”

Indeed they’re radical for social justice. Chavez delivers so they support him. Imagine the difference from America. Poverty’s unprecedented. Recent Census data show half US households impoverished or bordering on it. Millions have no jobs and can’t find one. Homelessness and hunger keep growing. When need’s greatest, austerity drives people to the edge.

In contrast, Venezuelans get free education to the highest levels, quality healthcare at no cost, subsidized food, affordable electricity and cooking gas, gasoline at 7 cents a gallon, and other social benefits. Moreover, unemployment’s 6%. Homelessness is low. Attention Centers help them. So do rehab facilities to get them productive again.

Venezuela’s far from perfect. Problems plague the country, including high inflation and blackouts. However, positive steps are taken to improve things. For example, poverty’s half its level since Chavez took office, and deep poverty fell from 25% to 7%. In America’s, the world’s richest country, it’s skyrocketing.

Why? Because the business of America is war and grand theft. People are increasingly on their own sink or swim. Duopoly power governs. Rigged elections defile democratic governance. Banker bailouts, imperial wars, policies favoring wealth and power, and repressive police state laws define their agenda.

No wonder Venezuelans support him, and why America hates him. His good example exposes its duplicity. Washington calls it a threat.

“Ultimately, it is up to the Venezuelan people to determine what they gain from a relationship with a country that violates universal human rights and is isolated from much of the world. Here in the Americas, we take Iranian activities, including in Venezuela, very seriously.”

He also accused Chavez of “erod(ing) the separation of powers….restrict(ing) the universal rights of the Venezuelan people, threaten(ing) basic democratic values, and fail(ing) to contribute to the security of the region.” At the same time, he claimed Washington doesn’t “pretend to dictate” policies to sovereign nations.