It’s the only response a high-ranking neocon can provide, considering all the evidence and questions unanswered: anybody who believes 9/11 was an inside job, or for that matter questions the official fairy tale version, is insane.

And this is precisely what Newt Gingrich told Matt Lepacek of We Are Change — he is insane. No debate, no further conversation. He’s crazy and so are millions of other people, from the guy who has questions about the irrationality of fires toppling steel buildings to the full-blown 9/11 truth activist. Nuts. Bonkers. Not worth more than a few dismissive words.

Newt was telling a fib. Because he did indeed attend Bohemian Grove. He was in attendance back in 1995 when Dubya and Senior gave “lakeside talks.” A photo (at right) was published in the Annals of the Bohemian Club (vol 7), 1987-1996. Bet Newt didn’t know we knew about that one. Oops. See more photos and a write-up at Infowars.

When not lounging at the Grove, Newt has a prestigious and very relevant position over at the Council on Foreign Relations. He is on the “Terrorism Task Force,” and it figures of course because he is a full-blown neocon. In addition to the CFR, Gingrich rubs elbows over at the American Enterprise Institute — when Bush mentions his “minds,” picked from AEI, he is talking about guys like Newt. The AEI is a primo neocon organization, counting as members other sinister figures, such as John Bolton, Paul Wolfowitz, Richard Perle, John Yoo, and David Frum. So upset was Frum the other day, he physically attacked Stewart Howe and his camera for asking what Newt would likely characterize as insane questions, questions Mr. Frum, who should be arrested for assault, did not want to answer because he is guilty as sin.

In fact, Newt Gingrich is a war criminal at large. He was Bush’s Defense Policy Board — along with other war criminals, such as Richard Perle (as chairman), James Woolsey, Ken Adelman, Eliot Cohen, and the pathetic Dan Quayle — and this coterie of hand-picked neocons set in motion the invasion of Iraq and the ultimate murder of more than a million Iraqis. Gingrich compounded his crimes by working with the now-defunct Committee for the Liberation of Iraq and the recently revived Committee on the Present Danger. The former was a PNAC contrivance run by former Lockheed Martin vice president Bruce Jackson and stinking with perfidious neocons, including William Kristol, Robert Kagan, Joe Lieberman, and the above mentioned Richard “Prince of Darkness” Perle and James Woolsey. All serious war criminals of Nuremberg caliber.

Well, at least Newt didn’t attack Matt, not like David Frum would have probably done in the same situation. Instead, he refused to make eye contact, dismissed his questioner as insane, and denied two out of three accusations pointing to his position in the New World Order, neocon division. Newt can play both sides of the fence, though.

No doubt, come January of 2009, he will play with Hillary’s team as well. But then Hillary says the sort of things Newt wants to hear. She wants to bomb Iran – the word she used, I believe, was “obliterate” — and that’s precisely the next objective of the neocons.

I bet they realize their objective before Hillary gets anywhere near the White House. 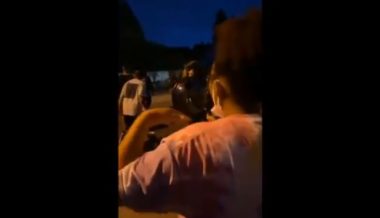