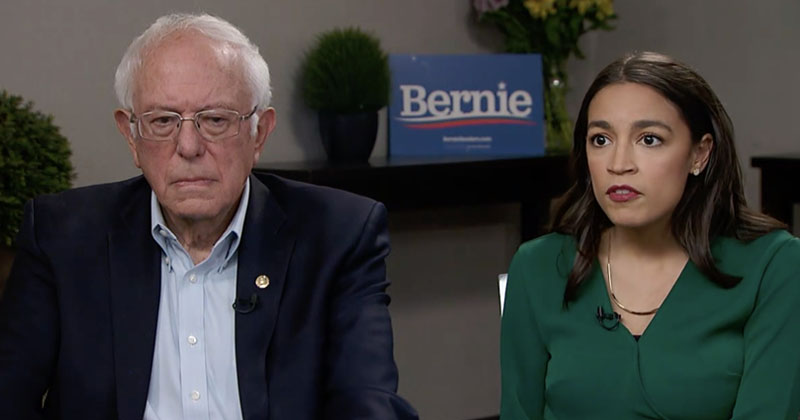 During an ABC interview on Sunday, Sanders praised AOC, who endorsed him last month, when asked if he’d consider her as a running mate if the 30-year-old congresswoman was old enough.

“Look, I’ve said this before, let me say it again and I don’t want you to hear this because your head will explode,” Sanders said, looking to Ocasio-Cortez. “I don’t know of any person…who in the course of less than one year…has had more of an impact on American politics as a freshman member of Congress than she has.”

“If I’m in the White House, she will play a very, very important role. No question. One way or another, absolutely,” he said.

“I happen to believe that the future of this country depends on young people becoming increasingly involved in the political process and there’s nobody I know that can do a better job inspiring young people than Alexandria,” Sanders added.

The idea of a far-left socialist lawmaker like AOC – who hasn’t done much in her nine months in Congress besides demonize Trump and lurch fellow Democrats to the left – getting elevated to a White House role should concern every American.

Fortunately, Bernie is averaging 15% in most of the Democrat primary polls, trailing both Joe Biden and Elizabeth Warren amid worries within the party that the Vermont senator is too radical to win a general election against President Trump.

At a recent town hall AOC was confronted with a constituent’s proposal to add the eating of children as part of the Green New Deal Platform.