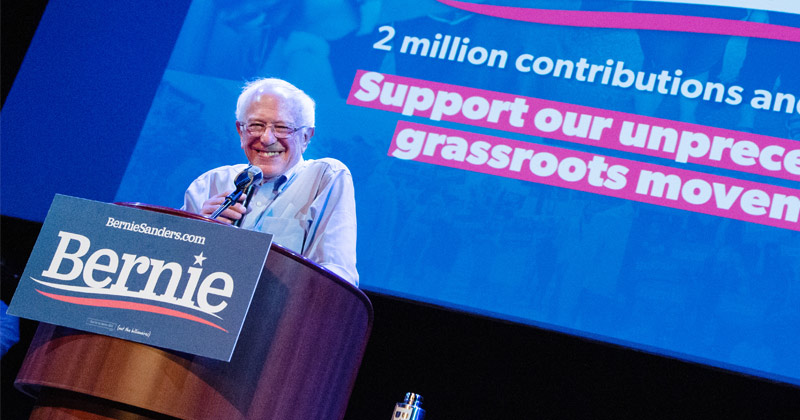 Greed is the religion of the billionaire class. And a nation based on greed will not survive morally, economically or politically.

That is why we fight to take power back from the billionaires and put it in the hands of the people, where it belongs.

“A nation based on greed will not survive morally, economically or politically,” Sanders stated.

Ironically enough, some of Sanders supporters were “questioning his socialist authenticity,” according to NPR, when he bought a $575,000 vacation home in 2016, which was around three times the average home price in his home state of Vermont.

“The $575,000, four-bedroom home includes 500 feet of Lake Champlain beachfront on the east side of the island, according to the Vermont newspaper Seven Days,” NPR stated. “The purchase makes this Sanders’ third home, and after the news broke of his recent purchase, the Internet became a breeding ground for complaints.”

It’s worth noting that Sanders’ hypocrisy of pushing socialism yet enjoying the fruits of capitalism is fairly common in socialist countries in which the country’s wealth is concentrated among a tiny elite while the population starves.

Given that, it’s almost as if Sanders is suggesting that a socialist country will not survive morally, economically or politically.

However, his schick of pushing socialism on a national stage seems to be working well for him financially.

The same can’t be said about Burlington College in Vermont which went bankrupt after Sanders’ wife served as its president for several years.

“People find it odd that the greatest proponents of socialism seem to live in high style,” stated a 2017 article from the Daily Wire. “The Castros are worth at least a billion dollars. Stalin lived the high life while his people starved in the Soviet Union.”

“Hugo Chavez’s second-oldest daughter is worth in excess of $4 billion; Chavez’s family owns 17 estates in the country. Current socialist leader Nicolas Maduro is also in the money.”

“Socialism is fine for those at the bottom,” the article continued. “It’s those at the top who really benefit, though, from just a few too many pudding cups. But they won’t be giving those up anytime soon.”