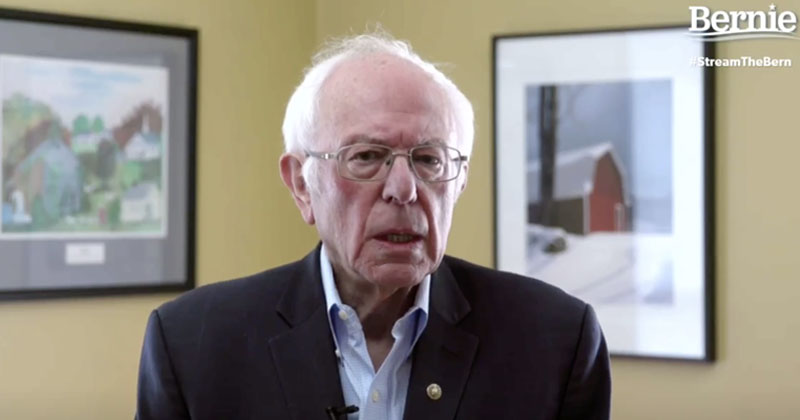 The socialist Democrat candidate made the announcement Wednesday, claiming that his campaign has “won the ideological struggle.”

“I have concluded that this battle for the Democratic nomination will not be successful,” Sanders said. “If I believed we had a feasible path toward the nomination, I would certainly continue with the campaign, but it’s just not there.”

Today I am suspending my campaign. But while the campaign ends, the struggle for justice continues on. https://t.co/MYc7kt2b16

“I cannot in good conscience continue to mount a campaign which cannot win and which would interfere with the important work required of all of us in this difficult hour.”

“Few would deny that over the course of the past five years, our movement has won the ideological struggle,” he added, saying that Medicare For All, $15 minimum wage, and the Green New Deal are all now popular platforms among the Democrat Party.

Sanders then called the Democrat frontrunner and presumptive nominee Joe Biden “a very decent man,” saying he would work with him to continue pushing socialism.

Biden released a lengthy response to Sanders’ exit, calling him “one of the most powerful voices” of leftism in the country.

I know Bernie well. He’s a good man, a great leader, and one of the most powerful voices for change in our country. And it’s hard to sum up his contributions to our politics in one, single tweet. So I won’t try to. https://t.co/Z6OkCDWFNm

He also appealed to Bernie supporters, saying he wants to earn their votes and that he really needs them to win.

“And to Bernie’s supporters: I know that I need to earn your votes,” Biden tweeted. “And I know that might take time. But I want you to know that I see you, I hear you, and I understand the urgency of this moment. I hope you’ll join us. You’re more than welcome: You’re needed.”

“Bernie Sanders is OUT! Thank you to Elizabeth Warren,” Trump tweeted. “If not for her, Bernie would have won almost every state on Super Tuesday! This ended just like the Democrats & the DNC wanted, same as the Crooked Hillary fiasco. The Bernie people should come to the Republican Party, TRADE!”

Bernie Sanders is OUT! Thank you to Elizabeth Warren. If not for her, Bernie would have won almost every state on Super Tuesday! This ended just like the Democrats & the DNC wanted, same as the Crooked Hillary fiasco. The Bernie people should come to the Republican Party, TRADE!

The Trump campaign also released a statement, saying the Democrat establishment “finally got the candidate they wanted in Joe Biden.”

With Bernie Sanders suspending his campaign, it’s all but official that the Democrat establishment got the candidate they wanted in Joe Biden, as well as the candidate President Trump will destroy in November.@TeamTrump statement: pic.twitter.com/dRxVhjHL8E