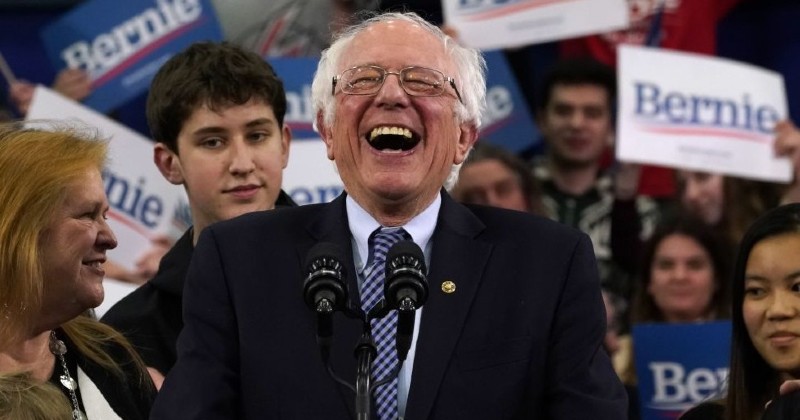 Sen. Bernie Sanders is set to win the Nevada caucus by a landslide, according to Fox News projections.

The 2020 socialist candidate is believed to be the clear winner of the third primary state with 54.3% of the vote as of 6:30 PM CST, but it’s unclear who exactly will win second and third place, though recent numbers show Joe Biden in second at 17.2% and Sen. Elizabeth Warren in third at 9.2%, with 4% of the vote officially counted, according to the Associated Press.

Notably, the Democrat establishment went ballistic Saturday over the reality that their party has been taken over by the far-left, who risk alienating the rest of America in the general election over their radical socialist policy proposals.

For example, MSNBC anchor Chris Matthews suggested the Democrat establishment may prefer Trump over Sanders in 2020, and even compared his victory to the Nazi invasion of the Maginot Line in France during World War II.

MSNBC contributor Al Sharpton agreed with Carville’s assessment, warning that a Sanders nomination would mean losing Congress to the Republicans.

the messaging coming from MSNBC is that Sanders would by definition lose congress to the republicans. Now sure how that math works pic.twitter.com/eZmr0ggCia

President Trump congratulated Sanders on Saturday, and reminded him not to let the corrupt Democrats steal his nomination again.

“Looks like Crazy Bernie is doing well in the Great State of Nevada,” Trump tweeted. “Biden & the rest look weak, & no way Mini Mike can restart his campaign after the worst debate performance in the history of Presidential Debates. Congratulations Bernie, & don’t let them take it away from you!”

Looks like Crazy Bernie is doing well in the Great State of Nevada. Biden & the rest look weak, & no way Mini Mike can restart his campaign after the worst debate performance in the history of Presidential Debates. Congratulations Bernie, & don’t let them take it away from you!

Sanders essentially declared war on the establishment Democrats on Friday, telling his supporters in a tweet that they “can’t stop us.”

A Mike Bloomberg HQ in Knoxville was vandalized yet Bernie refuses to condemn that behavior further proving the hypocrisy of the radical left.