Converted Democrat Bernie Sanders lost big to Hillary Clinton on Tuesday. The former Secretary of State won primary battles in Florida, North Carolina and Ohio. Clinton now has 791 delegates and needs one-third of the remaining delegates in 28 contests to secure the nomination. She only needs to win 60 percent of the vote in California, New York, Maryland, New Jersey and Arizona to pick up another 900.

While it is nearly impossible for an outsider to beat the rigged superdelegate system that controls the Democrat party nomination process, Sanders may have made more headway if he had gone after Clinton on foreign policy.

Tom Donilon is a former member of the Steering Committee of the Bilderberg Group, a “Distinguished Fellow” at the Council on Foreign Relations, a member of the Rockefeller Brothers and Ford Foundation funded Aspen Group, and a member of the globalist Trilateral Commission. Donilon acted as a key player in the bombing and dismantlement of the former Yugoslavia and the takeover of Bosnia by the US and EU under the 1995 Dayton Accords.

Michèle Flournoy, described as a “liberal hawk, is a former undersecretary of defense for policy in the Obama administration and the CEO of the Center for a New American Security (CNAS), a national security and military analysis think tank. CNAS hired arch neocon Eliot Cohen, a leading proponent of the Bush invasion and destruction of Iraq. She worked with the neocon think tank the Project for the New American Century and hobnobs with the CFR.

Madeleine Albright, a former Secretary of State in the Clinton administration, enthusiastically defended the brutal sanctions imposed on Iraq which resulted in the death of as many as 576,000 children. In 1996 she defended the murderous sanctions during 60 Minutes interview when she declared “we think the price is worth it.” Albright is a director emerita of the CFR and a co-investor with Jacob Rothschild, 4th Baron Rothschild and George Soros, in a $350 million investment in Africa. 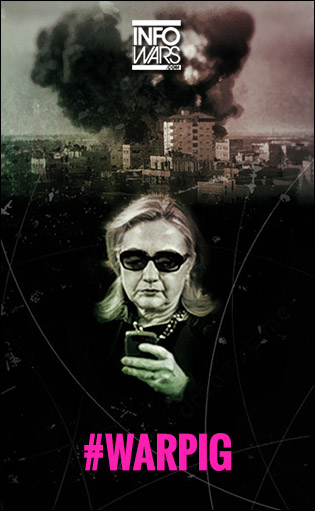 Hillary Clinton’s role in the destruction of Libya is well-known, and yet Sanders did not criticize the US-NATO invasion.

Instead of putting the illegal invasion responsible for the murder of thousands of Libyans in its proper context (as a crime against humanity), Sanders pontificated on regime change and the national security state’s war on terror.

“She was proud to have been involved in regime change in Libya, with [Muammar] Gaddafi, without worrying, I think, about what happened the day after and the kind of instability and the rise of Isis that we have seen in Libya,” he said in December.

Sanders did not put Libya in its proper context because, like Clinton, he is a neoliberal  interventionist.

“Sanders is not a pacifist,” reports The Washington Post. “He supported U.S. use of force in the Balkans under Bill Clinton, and the original Afghanistan intervention to get Osama bin Laden and al-Qaeda after Sept. 11, 2001.”

“Is there a moral limit to the military violence you are willing to participate in or support? Where does that limit lie? And when that limit has been reached, what action will you take?” asked former Sanders staffer Jeremy Brecher prior to his resignation.

“The attack on Kosovo is hardly the extent of Sanders’ hawkishness,” notes Michael Arria. “While it’s true he voted against the Iraq War, he also voted in favor of authorizing funds for that war and the one in Afghanistan. More recently, he voted in favor of a $1 billion aid package for the coup government Ukraine and supported Israel’s assault on Gaza. At a town hall meeting he admitted that Israel may have ‘overreacted,’ but blamed Hamas for the entire conflict. After a woman asked why he refused to condemn Israel’s actions, he told critics: ‘Excuse me! Shut up! You don’t have the microphone.’”

A principled stand on non-intervention may have separated Sanders from Clinton and the foreign policy of the national security state—and would have drawn the support of a marginalized anti-war faction of the Democrat party—but it would not have made much of a difference.

The political process, particularly on the Democrat side, is rigged to make certain the same vetted roster of insiders are selected and elected. The goal is to make certain, no matter who sits in the Oval Office, interventionist policies are followed.

Bernie Sanders would dutifully follow the dictates of the war party had he made it to the White House.

The problem is, despite his support for the war party, his overly socialist ideas are too radical for establishment Democrats and their corporate and banker patrons. Clinton claims she will address the financial policies of the elite that are gnawing away at the middle class, but this is merely insincere rhetoric designed to fool gullible Democrat voters. She is, after all, the candidate backed by Goldman Sachs, JPMorgan, Citibank and transitional corporations.