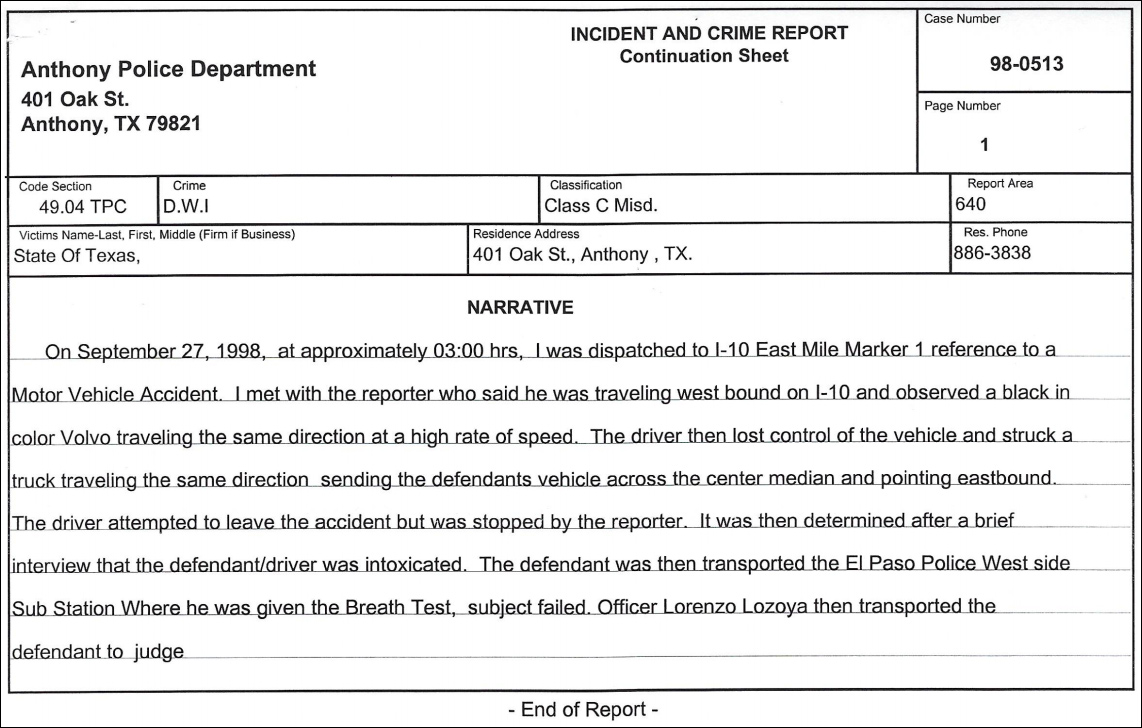 Texas Democrat senatorial candidate “Beto” O’Rourke on Friday denied he fled the scene of an accident following a drunken crash, contradicting information in a police report about the incident.

O’Rourke addressed the Sept. 1998 crash on Friday during a debate with Republican incumbent Sen. Ted Cruz.

Asked about the accident, which led to a DWI arrest after O’Rourke failed breathalyzer test with 0.136 and 0.134 blood alcohol content (.10 was the legal limit at the time of the arrest), O’Rourke denied he committed a hit-and-run.

“As the Houston Chronicle pointed out recently, a witness said in that accident that you tried to leave the scene of the accident. Did you, and should voters be concerned about this incident?” the debate moderator asked.

“I did not try to leave the scene of the accident, though driving drunk, which I did, is a terrible mistake for which there is no excuse or justification or defense,” O’Rourke responded, proceeding to turn the question into an argument about “white privilege.”

The Houston Chronicle in late August provided details about O’Rourke’s accident and subsequent arrest citing the police report regarding the incident.

“Although the arrest has been public knowledge, police reports of the September 1998 incident – when the Democratic Senate candidate had just turned 26 – show that it was a more serious threat to public safety than has previously been reported,” noted the Chronicle.

According to the police report, officers spoke with a reporter who witnessed the accident.

“I met with the reporter who said he was traveling west bound on I-10 and observed a black in color Volvo traveling the same direction at a high rate of speed,” an Anthony Police Department official documented. “The driver then lost control of the vehicle and struck a truck traveling the same direction sending the defendants vehicle across the center median and pointing eastbound. The driver attempted to leave the accident but was stopped by the reporter.”

O’Rourke was also arrested in 1995 for a “burglary” offense after he committed an “attempted forcible entry” at the University of Texas El Paso Physical Plant.

“That happened while I was in college. I along with some friends were horsing around, and we snuck under the fence at the UTEP physical plant and set off an alarm. We were arrested by UTEP police. … UTEP decided not to press charges. We weren’t intending to do any harm,” O’Rourke told the El Paso Times in 2005.

Editor’s note: This story was updated to reflect the legal BAC limit in 1998 was .10, not .08 as previously noted.