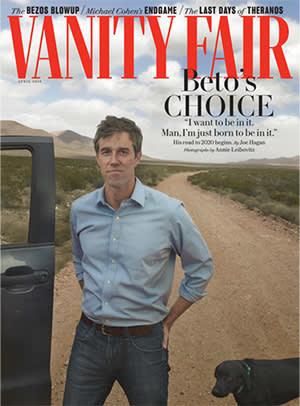 O’Rourke told US media that he would run as a Democratic candidate for president. He had first suggested that he was running in an article for Vanity Fair magazine published on Wednesday.

“This is a defining moment of truth for this country and for every single one of us,” O’Rourke said in a video announcing his candidacy sent to US media.

“The challenges that we face right now, the interconnected crises in our economy, our democracy and our climate have never been greater. They will either consume us, or they will afford us the greatest opportunity to unleash the genius of the United States of America.”

As Axios notes, Beto was unknown outside of Texas until his race against Ted Cruz put him on the national stage. If he ends up winning, AP writes that he “would be the first U.S. politician to do so since Abraham Lincoln lost his Senate bid to Stephen Douglas in Illinois in 1858, then was elected president two years later.”

The fluent Spanish speaker created a grassroots phenomenon by driving to all 254 counties in Texas and posting images of his travels on social media. He raised a record $38m in the quarter before the election from small donors, easily outpacing Mr Cruz despite not taking money from special interests. Donald Trump and the Republican establishment became so concerned that Mr O’Rourke might beat Mr Cruz that the president flew to Texas to campaign for the man he once mocked as “Lyin’ Ted” Cruz.

“He’s not ‘Lyin’ Ted’ any more. He’s Beautiful Ted’,” Mr Trump said two weeks before the election, as he slammed Mr O’Rourke who was attracting big crowds at his rallies across the second-biggest US state.

The corruption on the left has become apparent after Lisa Page’s testimony and months of the fake Russian collusion witch hunt. Owen comments on the latest headlines.

O’Rourke, who is starting a three-day swing through eastern Iowa on Thursday, said he will hold a kick-off rally for his campaign in El Paso, Texas, on March 30: “You can probably tell that I want to run. I do. I think I’d be good at it,” Mr O’Rourke told Vanity Fair for a cover story illustrated with an image taken by the renowned portrait photographer Annie Leibovitz.

The 46-year-old Irish-American had been mulling a presidential bid since his unexpectedly strong challenge to Cruz. While he lost 51-48 per cent, his performance was seen as remarkable in a conservative state that has not elected a Democrat to the Senate for three decades and not voted for a Democrat candidate for president since Jimmy Carter in 1976.

Donald Trump and the Republican establishment became so concerned that Mr O’Rourke might beat Mr Cruz that the president flew to Texas to campaign for the man he once mocked as “Lyin’ Ted” Cruz.

“He’s not ‘Lyin’ Ted’ any more. He’s Beautiful Ted’,” Mr Trump said two weeks before the election, as he slammed Mr O’Rourke who was attracting big crowds at his rallies across the second-biggest US state.

Joe Hagan, who wrote the cover story, tweets that he spent two months reporting this story before ever meeting Beto, starting last December:

I spent 2 months reporting this story before ever meeting Beto, starting last December. He wasn't doing any media at the time but I figured it was an interesting story whether he talked or not, whether he ran or not.

“I convinced Beto O’Rourke to do this cover story after walking up to his house and introducing myself one Sunday afternoon. He was lounging on the front veranda, barefoot in blue jeans and T-shirt, talking on his cell phone.”
Hagan captures O’Rourke’s “radical openness”:

Beto O’Rourke seems like a cliff diver trying to psych himself into the jump. And after playing coy all afternoon about whether he’ll run, he finally can’t deny the pull of his own gifts. “You can probably tell that I want to run,” he finally confides, smiling. “I do. I think I’d be good at it.” …

The more he talks, the more he likes the sound of what he’s saying. “I want to be in it,” he says, now leaning forward. “Man, I’m just born to be in it, and want to do everything I humanly can for this country at this moment.”

O’Rourke enters the crowded Democratic field as moderately progressive candidate who wants to reform the immigration system and opposes the wall that Trump wants to build on the US-Mexico border. During the Senate race, he also made criminal justice reform a central issue, which helped generate strong support from African-Americans.

Larry Sabato, a University of Virginia politics professor, said Mr O’Rourke was “terrific on the trail” but one question was whether he could “capture lightning in a bottle a second time”, given that his opponent will not be Cruz.

At rallies from Dallas to Amarillo in west Texas before the midterms, some supporters told the Financial Times the Mr O’Rourke reminded them of former president Barack Obama or of Robert Kennedy, the former attorney-general and brother of president John F Kennedy who was also assassinated as he ran for president in 1968.

Democratic critics say Mr O’Rourke has no discernible record from his time in Congress. But his fans point to his optimistic vision for the US, his anti-Trump message on immigration and his ability to draw large, excited crowds as evidence that he has the ability to turn out enough voters to beat the president.

O’Rourke faces a very crowded and diverse field of opponents, who include two African-Americans and a record number of women, including senators Kamala Harris and Elizabeth Warren. He also will face Bernie Sanders who, despite his age, was able to electrify younger voters in 2016 when he challenged Hillary Clinton for the nomination.

His campaign launch also comes as Joe Biden, the former vice-president and moderate Democrat, is expected to launch his own candidacy.