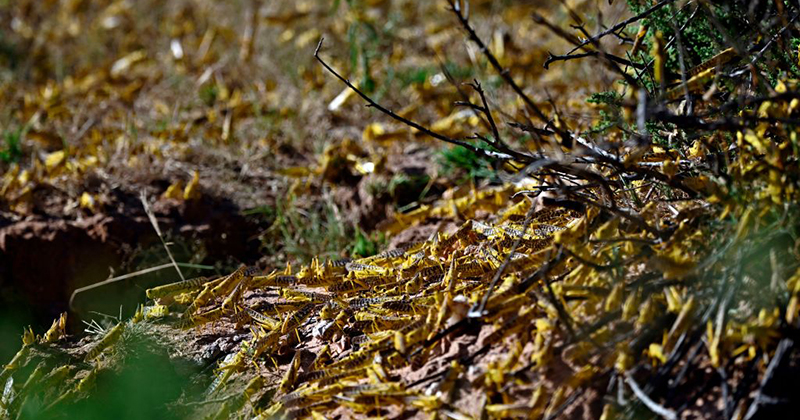 As if the world’s facing a looming new global pandemic weren’t enough, here’s yet another rare occurrence of apocalyptic proportions threatening to devastate the economy and way of life on an entire continent.

The worse outbreak of desert locusts in seventy years is ravaging East Africa — specifically Kenya as hundreds of millions have swarmed in from Somolia and Ethiopia, reports the Associated Press.

The hum of millions of locusts on the move is broken by the screams of farmers and the clanging of pots and pans. But their noise-making does little to stop the voracious insects from feasting on their crops in this rural community.

The by all accounts “huge” infestation is threatening to devastate communities and a region already long struggling with food security. One news source likened it to a Biblical Locust Plague With Swarms the Size of Cities.

The invading locusts are “deadly” in the sense that these ‘mega-swarms’ devour crops at incredibly rapid pace — at a faster rate of destruction than other natural disasters.

The numbers and immediate destructive force are staggering, according to quotes in the AP:

“Even cows are wondering what is happening,” one local farmer laments in the AP report. “Corn, sorghum, cowpeas, they have eaten everything.”

This as the mega-swarms consume the very fodder the livestock survive on.

There’s additional concern that new rains after March could bring another explosion of the fast breeding locusts prior to the dry season taking their numbers back down.

The UN Food and Agricultural Organization is reportedly mobilizing an emergency response, given even small swarms can wipe out crop fields at sizes constituting enough food that could have fed tens of thousands of people in a single day, which makes it a humanitarian disaster in the making.

It’s both the nature of their small size (about a finger’s length) and the fact that they swarm in millions at a time that make preventative measures nearly impossible.

The UN agency listed some creative but futile methods suggested and/or initiated in the past: “Although giant nets, flamethrowers, lasers and huge vacuums have been proposed in the past, these are not in use for locust control.”

It added, “People and birds often eat locusts but usually not enough to significantly reduce population levels over large areas.”