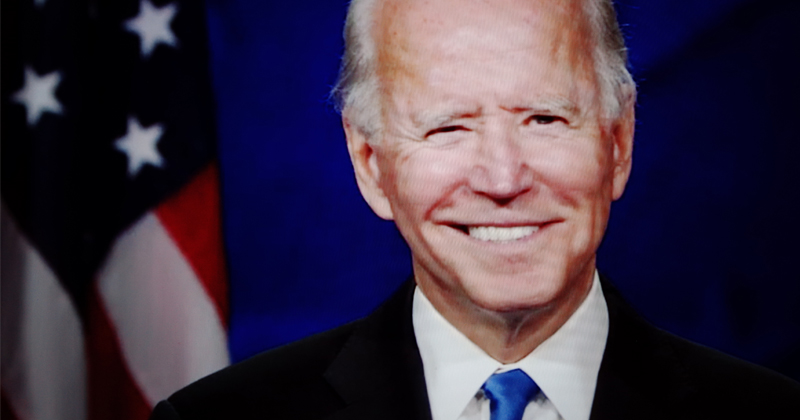 Joe Biden has accused President Trump of “encouraging” the race riots because they’re “a political benefit” to his reelection campaign.

Repeating identical talking points in Thursday appearances on CNN and MSNBC, Biden claimed that Trump is “absolutely” rooting for violence on the streets of America.


“He views this as a political benefit to him. He’s rooting for more violence,” Biden told MSNBC. “He’s encouraging this. He’s not diminishing it at all. This is his America now.”

The former vice president quoted Trump aide Kellyanne Conway saying that chaos would be better for their side. “When has a president ever — a spokesperson for the president ever said something like that?” Biden asked.

Biden said he is open to visiting Wisconsin following days of violent protests there after police shot a Black man, but that it would have to be done safely and that he did not want to “become part of the problem.

Biden also addressed attacks on the seriousness of his Catholic faith from Catholic allies of Trump. “I think it’s kind of preposterous,” Biden said. “I never miss Mass. It’s part of who I am.” –Bloomberg

The former Vice President also addressed House Speaker Nancy Pelosi’s suggestion that he skip debates with Trump, saying “As long as the commission continues down the straight and narrow as they have, I’m going to debate him.”

“I’m going to be a fact-checker on the floor, while I’m debating him.”

He also points out that Mike Pence's attacks about violence in "Joe Biden's America" don't make sense because "the problem we have right now is we're in Donald Trump's America." pic.twitter.com/cH74DmBdHB


Perhaps Biden’s comments were inspired by a Thursday Politico article highlighting how the unrest in Kenosha and other parts of the country are “playing into Trump’s hands.”

“There’s no doubt it’s playing into Trump’s hands,” said former Madison, WI mayor Paul Soglin (D). There’s a significant number of undecided voters who are not ideological, and they can move very easily from Republican to the Democratic column and back again. They are, in effect, the people who decide elections. And they are very distraught about both the horrendous carnage created by police officers in murdering African Americans, and … for the safety of their communities.”

And as the New York Times notes:

While many demonstrators have been peaceful, others have set fire to buildings. At least four businesses downtown have been looted. Men armed with guns have shown up to confront protesters, leading to the shooting of three people, two of them fatally. On Wednesday, a white teenager from across the state line in Illinois was arrested in connection to the shooting, and Mr. Trump vowed to send in federal law enforcement and additional National Guard troops.

In Kenosha County, where the president won by fewer than 250 votes in 2016, those who already supported Mr. Trump said in interviews that the events of the past few days have simply reinforced their conviction that he is the man for the job. But some voters who were less sure of their choice said the chaos in their city and the inability of elected leaders to stop it were currently nudging them toward the Republicans.

“I’m not 100 percent sure of anything yet,” said 41-year-old tractor factory worker John Geraghty. “But as of now I’m really not happy about how Democrats are handling any of this.”

“The Democratic agenda to me right now is America is systematically racist and evil and the only people who can fix it are Democrats,” he added. “That’s the vibe I get.”

And in a poll taken between June and early august – before the Kenosha riots, Marquette Law School found that public support for Black Lives Matter in Wisconsin had dropped from +25 to +0 in Wisconsin over the course of two months.

Democrats need to be extremely concerned about what's happening in Wisconsin, where support for BLM has gone from +25 to +0 in 2 months. https://t.co/2wNMWoW6it


The Times notes the case of 62-year-old flooring company owner Don Biehn, who was standing in line at a gun store on Tuesday afternoon to buy his first pistol in order to protect his business.

Mr. Biehn said he had been calling county and state officials for days, trying to explain how grave the situation was.

“There’s people running all over with guns — it’s like some Wild West town,” Mr. Biehn said. “We are just waiting here like sitting ducks waiting to get picked off.”

He added: “It’s chaos — everybody is afraid.”

Mr. Trump, he said, “was not my man,” but now he is grateful he is president. –New York Times

And here’s the punchline from the New York Times:

“Some Democrats, nervous about condemning the looting because they said they understood the rage behind it, worried that what was happening in their town might backfire and aid the president’s re-election prospects.”