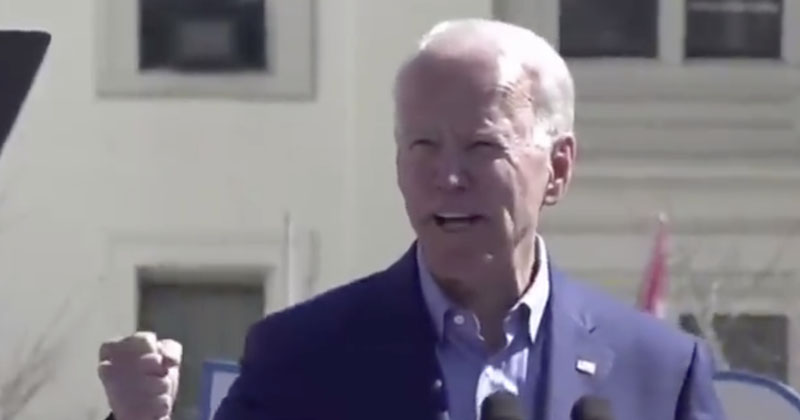 Some of Joe Biden’s critics say his constant gaffes on the campaign trail have gone beyond his usual antics and into the realms of senility. The former VP seemed determined to troll them (or prove them right).

If you want to believe Biden is not fit for the presidency due to a deteriorating mind, there is plenty of evidence to support the theory.

At times he has acted quite bizarrely on the campaign trail, telling voters to elect other candidates if they don’t like him as he is, and even insulting his critics – like when he jokingly called a woman questioning his poor Iowa performance “a lying dog-faced pony soldier.” At other times he has seemingly failed to remember basic things, like the name of President Obama or the wording of the Declaration of Independence.

The awkward question of Biden’s cognitive capacities has been carefully avoided by the mainstream media for months, but not by social media users.

And if Biden wanted to convince people he was mentally fit during his latest rally speech in St. Louis on Saturday, he chose a strange way to do it. Touting one of his electoral strengths – his having served in the Obama administration – the former vice president described himself as an “Obidenbama Democrat.”

The benefit of the doubt certainly goes to Biden, who could well have deliberately pushed his association with the popular former president a few notches closer to being one with Obama. It’s not like Biden doesn’t have a decades-long record of gaffes and questionable jokes.

But after Biden’s St. Louis speech, which lasted less than 10 minutes, one has to wonder whether cracking one of those at this particular moment would be good for attracting undecided voters.

Meanwhile, people who don’t see the mental state of their potential next president as a laughing matter get fresh fuel for their concerns every day. The DNC, for example, have changed the format of the March 15 debate, during which Biden will be pitted against Vermont Senator Bernie Sanders for two straight hours. The candidates will no longer stand at podiums and take questions from professional moderators, instead sitting and responding to questions from the audience. You can imagine how Sanders’ supporters see the change.

“Did they just change the rules so they don't have to actually debate?”

Why yes, yes they did. @dnc did. The debate is now a Townhall.

I was looking for a sign that the DNC knew Joe Biden Has Dementia, but this is ridiculous. https://t.co/7H6cJ0Wo1i

And earlier this week, Biden’s apparent reluctance to make on-camera appearances was highlighted by, of all people, MSNBC host Rachel Maddow. She made a public appeal to the Biden campaign for a long in-depth interview after she got one from Sanders.