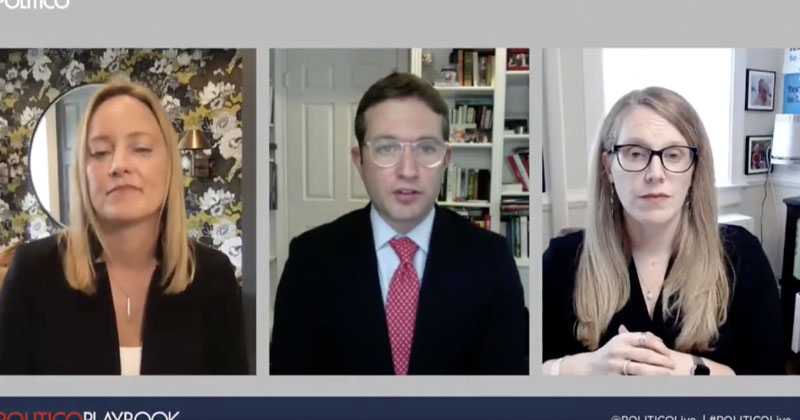 “First of all, uh, I would say very clearly the vice president uses a teleprompter on occasion when you see him giving a speech,” Dillon said. “But he’s also out there every day taking questions from reporters.”

Biden campaign manager gets very defensive when asked about Biden using a teleprompter for TV interviews; refuses to deny that he does. pic.twitter.com/4j8Ffr8jvl

“You’re seeing that today, he’s in Florida and will continue to take questions – I think he took question four or five times on the stump on his travel last week,” she added.

In one of the questions Dillion is talking referring to, Biden ignores a question about his loss of of support among Hispanics while visiting Florida on Tuesday.

Joe Biden has arrived in Tampa, Florida for his first visit to the state as the Democratic nominee. He is hosting a roundtable with veterans here and then a Hispanic Heritage Month event in Kissimmee. pic.twitter.com/qizRPiSrXn

The speculation that Biden uses a teleprompter during interviews came a recent interview where Biden accidentally revealed the reflection of a teleprompter with his framed picture of his family that he showed Corden.

Check out the teleprompter in the reflection. Biden blatantly read from a script for most of the interview with James Corden.

I bet his handlers weren’t too happy with him going off script. He probably got reprimanded. pic.twitter.com/BPK2FGB8cz

Following that interview, President Trump also said Biden was reading off the teleprompter to answer questions, claiming his “handlers” are doing “everything possible” to get him elected.

His handlers and the Fake News Media are doing everything possible to get him through the Election. Then he will resign, or whatever, and we are stuck with a super liberal wack job that NOBODY wanted! https://t.co/eHhy0yBx9o

Speculation over Biden’s use of teleprompters has grown over the summer following several questionable instances of Biden giving what appeared to be scripted answers.

When the announcer at President Trump’s recent rally here urged a packed airplane hangar of supporters to don their masks, a cacophonous round of boos erupted, followed by defiance. No matter that the attendees’ chairs were inches apart, their temperatures had not been taken and masks were required by the state.