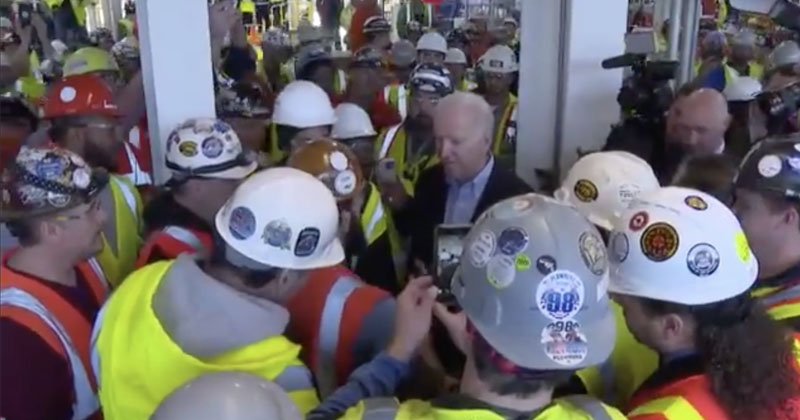 Joe Biden got into a heated exchange Tuesday with a Michigan voter who called out his anti-Second Amendment views.

While touring an auto factory ahead of the Michigan primary, a group of autoworkers accused Biden of trying to curtail the Second Amendment.

“You’re gonna take away our guns,” a worker told Biden.

Different angle, close up of ⁦@JoeBiden⁩’s aggressive and clearly unstable behavior while yelling at the auto worker. pic.twitter.com/dzk2dshfZH

When a Biden staffer tried to break up the confrontation, Biden dismissed her, telling her to “Shush.”

“Guess what? You’re not allowed to own any weapons,” Biden continued. “I’m not taking your gun away, at all. Do you need a hundred rounds?”

“You were there with Beto when you said you were going to take our guns away,” an auto worker said.

“It’s a viral video,” the autoworker pointed out.

Biden dismissed that, saying “they” are putting out all sorts of viral videos that are a “lie.”

“It’s a viral video like the other ones they’re putting out, it’s simply a lie,” Biden said, before explaining how he was going to take away firearms from American citizens.

“This is not okay,” the autoworker responded.

As the autoworkers correctly noted, Biden had said last week he would appoint Beto O’Rourke to lead the charge against “gun violence.”

O’Rourke repeatedly said he would confiscate firearms, saying during a primary debate, “Hell yes we’re going to take away your AR-15, your AK-47.”

And last year, Biden said on CNN that he would confiscate all “assault weapons.”

“So to gun owners out there who say, ‘Well, a Biden administration means they will come for my guns,'” Anderson Cooper said.

“Bingo,” Biden responded. “You’re right, if you have an assault weapon.”

In Michigan, Biden is polling way ahead of socialist opponent Bernie Sanders at 56% to Bernie’s 33% and is expected to easily win the state’s primary on Tuesday.

Virginia Democrats threaten pension of pro-Second Amendment Sheriffs & police as the Oregon fight over carbon taxes heats up with Republicans of both houses walking out. Is secession next?