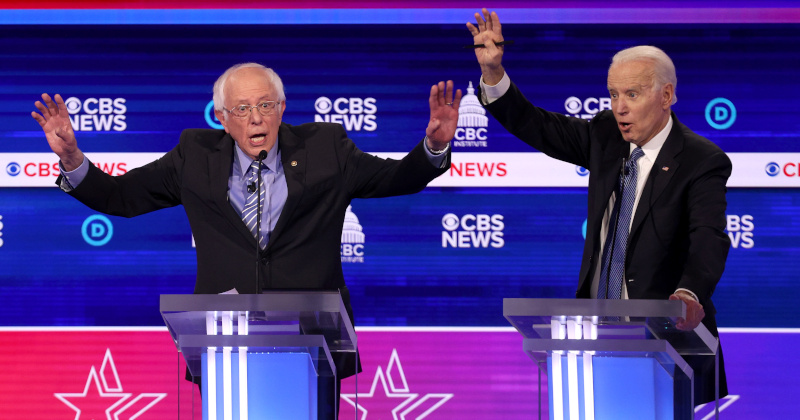 With nearly all of the vote counted in Florida, the southeastern state that is the adopted home of Republican President Donald Trump, Biden was beating Sanders of Vermont 62% to 23%.

The margin was similar in Illinois, where with more than half of precincts reporting Biden held an edge of 59% to 36%.

With the wins Tuesday, Biden, in his third run for the presidency over three decades, has won 19 of the last 23 state primaries over Sanders, a self-declared democratic socialist who has vowed to lead a social and economic revolution, including a massive overhaul of the U.S. health care system.

Biden, the former two-term vice president under President Barack Obama, has argued that voters are more concerned about restoring stability and decency to the White House and seeking practical solutions to problems than the dramatic, revolutionary programs Sanders and his progressive allies are espousing.

Biden spoke from his home in Delaware late Tuesday saying that while he and Sanders may disagree on tactics, they share ground on wanting more affordable health care, reducing income inequality and combating climate change.

“Senator Sanders and his supporters have brought a remarkable passion and tenacity to all of these issues,” Biden said. “Together they have shifted the fundamental conversation in this country. So let me say especially to the young voters who have been inspired by Senator Sanders, I hear you, I know what’s at stake, I know what we have to do.”

The victories Tuesday add to Biden’s lead in pledged delegates for the Democratic national convention in July, where the party will pick its nominee to face Trump in November’s national election as the president seeks a second four-year term in the White House.

Trump narrowly won the key battleground state of Florida in 2016 over his Democratic challenger, former Secretary of State Hillary Clinton, and the populous state is expected to be highly contested again this year.

Before Tuesday’s voting, Biden held an 898-745 lead over Sanders in pledged delegates to the national convention. At least 1,991 delegates are needed to clinch the nomination to run against Trump.

The fivethirtyeight.com political forecasting site is projecting that Biden could add more than 300 delegates to his total in the Tuesday voting and push his lead over Sanders to about 320 delegates — a near insurmountable lead.

A fourth state, Ohio in the U.S. heartland, had also been set to hold its primary election Tuesday.

But the state’s Republican governor, Mike DeWine, postponed it hours before public voting was set to start in the face of the growing fears of large numbers of voters and poll workers mingling in close proximity with each other at a time when health officials are urging the exact opposite, to safeguard against contracting the deadly coronavirus.

Ohio is now set to vote in June. It is one of five states, along with Maryland, Georgia, Louisiana and Kentucky, that have postponed a party presidential primary because of the coronavirus pandemic that is causing a historic economic crisis and a shutdown of businesses, schools, sporting events, and has led thus far to nearly 6,500 cases of infection and 109 deaths in the U.S., according to worldometers.info.

Voters in the three states that did vote Tuesday often arrived at polling places to find a chaotic situation, sometimes without election officials or a lack of disinfecting supplies at a time when federal officials are urging Americans to regularly clean surfaces they touch.

Some voters in Arizona were told to cast ballots at municipal buildings that otherwise were closed because of the public health crisis.

Some voters in Ohio showed up to vote, unaware DeWine had stopped the voting, even though a judge had ruled that his close-the-polls effort was invalid.

There was wide interest in the Democratic race in Florida, which Trump now calls his official home, even though he made his professional mark before winning the presidency as a real estate mogul in New York.

Nearly 1.1 million Florida Democrats voted early or by mail ahead of the Tuesday primary, up from 890,000 four years ago. In all, 1.7 million Democrats voted in the 2016 primary.