Every indication suggests that Bilderberg-approved Texas Governor Rick Perry is set to become the frontrunner in the Republican race to challenge Barack Obama for the presidency, illustrating once again how a shady, secretive and undemocratic global elite holds the reigns of true power while Americans are distracted by the delusional notion that they have a genuine choice in 2012. 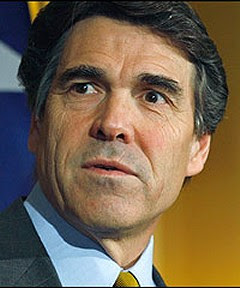 “Perry has said he will announce his decision soon. One member of his campaign team said he was closer than ever to joining the race and he was testing the prospects in the early caucus and primary states of Iowa, New Hampshire, Nevada and South Carolina. If he does stand, Republicans at the New Orleans conference predicted he would become the frontrunner of a so-far uninspiring field,” reports the London Guardian.

Texas Governor Perry, a protégé of Karl Rove, is very good at acting like a down-home populist, but that’s all it is – an act. Perry is George W. Bush 2.0.

While spewing Tea Party-style rhetoric about secession, shooting coyotes and courting the favor of Christian evangelicals, behind closed doors Perry has been quietly selling out Texas to globalist interests, auctioning off highways to foreign companies to turn them into profit-driven toll roads.

“Speculation that Perry is the Bilderberg group’s ace card was prompted by the current political climate, which can largely be gleaned from the fact that Perry is a longtime, unwavering supporter of the NAFTA Superhighway and related infrastructure projects,” wrote AFP’s Jim Tucker earlier this month. “These pave the way for the Bilderberg-supported North American Union (NAU) proposal that would merge the U.S., Canada and Mexico.”

Perry has also given enthusiastic support to former Mexican President Vicente Fox’s efforts to turn Texas into a sanctuary state for illegal immigrants. He also aggressively promoted the Rockefeller Foundation-backed HPV vaccination campaign in Texas that has led to deaths worldwide. David Rockefeller is a prominent Bilderberger, attending each annual meeting without fail.

Perry attended the June 2007 Bilderberg conference in Istanbul, Turkey, and in doing so violated the Logan Act, a United States federal law that forbids unauthorized citizens from negotiating with foreign governments.

Look beyond the rhetoric and study what Perry has actually done in his role as Governor – he’s the ultimate globalist – his every action illustrates how he’s the diametric opposite to the image of the Tea Party populist that he attempts to portray. That’s why he’s the perfect pick for the globalists, someone who can suck in the trust of the American people only to stab them in the back upon becoming president, just as Obama did before him.

Bilderberg has proven its kingmaker role time and time again not just in US politics but worldwide. Bill Clinton was a little-known Governor of Arkansas before he attended a Bilderberg meeting in 1991 and went on to become President a year later. Similarly, British Prime Minister Tony Blair attended Bilderberg before his election in 1997. According to Euro Weekly News, Maria Dolores De Cospedal’s attendance at Bilderberg 2011 in St. Moritz Switzerland also “augurs a victory in Spain’s next general election” for her Partido Popular party.

Obama himself was reportedly vetted by Bilderberg when he infamously disappeared to a secret location with Hillary Clinton in June 2008 in Northern Virginia, at precisely the same time and location the Bilderberg Group were convening in Chantilly. Bilderberg luminary James A. Johnson was also responsible for selecting Obama’s running mate Joe Biden, having also previously selected John Edwards as John Kerry’s right hand man in 2004 after Edwards had impressed Bilderberg elitists Henry Kissinger and David Rockefeller with a speech he gave at the globalist confab in Italy that year.

In a comparatively weak GOP field, the establishment cannot take any chances in allowing Ron Paul to gain momentum as the only candidate who has a real chance of defeating Barack Obama.

As polls have shown, out of the Republican candidates, only Ron Paul has a realistic hope of success in a hypothetical run off against Obama – the other candidates are equally unpopular as the President.

Despite the fact that Mitt Romney has been anointed by the establishment as the Republican favorite, a May CNN poll found that he would lose by 11 points if he got the nomination and went head to head with Obama, whereas Paul only trails the President by 7 points.

Bilderberg’s continual influence in picking US presidents and potential vice-presidents again serves up a reminder that the real power structure steering the planet goes beyond teleprompter-reading puppet presidents and rests in the hands of multi-generational globalists, central banking moguls and the CEO’s of the world’s biggest corporations, all of whom routinely attend the Bilderberg Group confab every year.

Watch the clips below in which Rick Perry’s connection to the NAFTA Superhighway and the North American Union is documented, as well as Alex Jones’ protest of Perry’s globalist agenda.