Hotel staff rooted for Alex Jones while conference was in progress

Once again betraying their sneering arrogance towards the American people and the first amendment, Bilderberg members attending their annual confab in Chantilly Virginia this past weekend referred to protesters outside as “cockroaches,” according to one of the hotel employees at the Westfields Marriott. 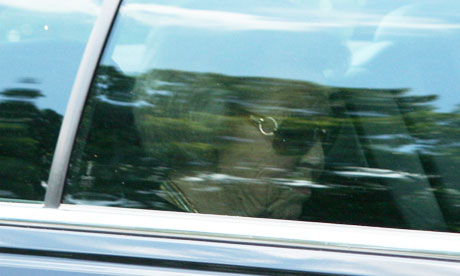 London Guardian writer Charlie Skelton managed to grab a quick word with one of the hotel staff as he was departing the venue. Skelton also gleaned from police that they were far from friendly towards Bilderberg.

“I was helping a cop move a security cordon near some trees, when he lowered his voice and casually let slip: “We don’t support Bilderberg, trust me.” And there’s what a hotel employee told me as he drove through the gates of the hotel. He lowered his window and beckoned me over. “I want you to know that they call you people ‘cockroaches’. I work in the hotel and they asked me if those cockroaches were still out there. They meant you.”

As we reported on Friday, in another conversation that took place in the hotel lobby, arriving Bilderberg members openly expressed their desire to see the demonstrators die in a plane crash.

Despite being sworn to secrecy, hotel employees routinely let slip information about private conversations held by Bilderbergers, primarily as a means of retribution for the rudeness and disrespect with which they are treated by attendees.

Skelton’s report confirms that despite some of the richest people on the planet being in attendance, hotel staff received no tips whatsoever. “This year, no one got anything,” he was told by a source inside the hotel.

After befriending an insider, protester Karen Field also revealed that hotel staff were watching the protests live on their computers while the conference was in progress.

“We had a load of the hotel staff gathered round a computer in the back office, watching Alex Jones – and they’re all rooting for him,” the source told Field.

Field also revealed that despite Queen Beatrix of the Netherlands getting the Penthouse Suite back in 2008, this year it was reserved for Henry Kissinger.

Another leak to emerge according to Field’s source was the fact that, “They don’t just all sit together in a big room – which is what I always thought – but they have tons of separate rooms and they split up for the meetings. The first ones are after 4:30 on Thursday.”

This more private dimension to the conference gives further credence to former NATO Secretary General and Bilderberg attendee Willy Claes statement that Bilderberg expects each member to implement what has been discussed in their relative fields of influence after the meeting is concluded.

Skelton also reports how Bilderberg organizers were confronted by photographers when they were preparing to leave the hotel. Some of the organizers tried to shield their faces, presumably ashamed to be working for a gaggle of globalists who display such malice towards the American people.

The admission that Bilderberg members view those who protest against them as “cockroaches” illustrates how the group represents nothing less than a sinister anti-American, undemocratic, authoritarian and elitist gaggle of control freaks.

During the 2010 Bilderberg confab in Spain, members were overheard complaining about the fact that these “cockroaches” could even afford to travel to different countries in order to make their voices heard.

This yet again underscores how Bilderberg’s political agenda, conducted behind closed doors and with the compliant silence of most of the mainstream media, is brazenly nefarious in that it is being crafted by people who display absolute contempt for ordinary citizens and their inherent freedoms.