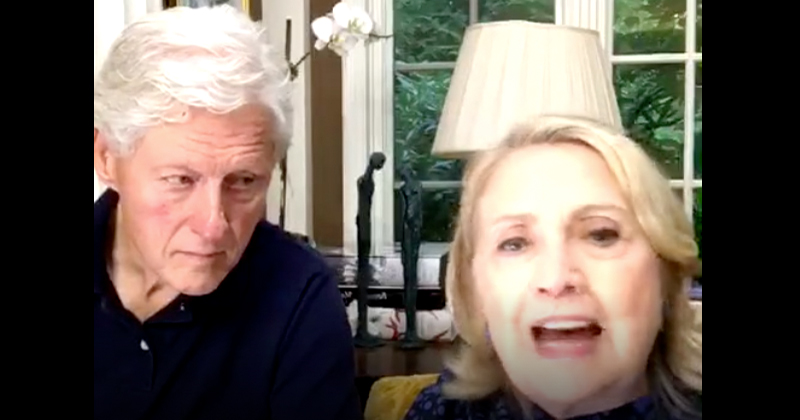 In an interview with leftist journalist April Ryan, the former president and first lady talked up Biden and launched joint attacks on President Donald Trump, who they asserted would refuse to leave the White House if he loses in November.

“Do not concede under any circumstance because I believe the other side is going to cheat and sneak and try everything they possibly can,” Hillary cautioned Biden during the Instagram Live broadcast.

After Ryan claimed Trump would cling to his Resolute desk, Bill claimed he’d likely barricade himself inside the White House.

More on the conversation from Washington Examiner’s Paul Bedard:

After Ryan joked that Trump’s “orange knuckles” won’t let go of his Oval Office desk, Bill Clinton laughed and added, “He probably won’t even come to Biden’s inauguration. He’ll be stacking sandbags around in the White House.”

Elsewhere in the interview, Bill goes on to claim Trump is “manipulating… suckers.”

He told Ryan, “It’s very important to keep in mind that beneath all these big questions you are asking are just Donald Trump’s proven ability to manipulate the psyche of the people that he is trying to scare the hell out of. Now, this is a person who says, ‘OK, I can’t win on my own, but people will believe whatever I tell them as long as it’s bad.”

Hillary painted Trump as the destroyer of civil liberties.

Hillary Clinton said, “He is a clear and present danger to our freedoms, our liberties, our unity, and we’ve got to defeat him. There is no alternative.”

As expected, the Deep State power couple oozes with bitterness throughout the interview, likely still reeling from Trump’s unexpected 2016 victory, but the “don’t concede” talking point is one Dems have been running with lately due to the president’s criticism of mail-in voting, which he argues can easily be rigged, or corrupted.

For our Country to be sending 80 million UNSOLICITED BALLOTS is very unfair and a roadmap to disaster. Even recent small and easier to control elections which did this are a catastrophic disaster. Fraudulent & missing Ballots like never seen before. 20% and 30% off. STOP!

Hillary made the same comment last month in an interview with former aide Jennifer Palmieri, telling her, “Joe Biden should not concede under any circumstances because I think this is going to drag out, and eventually, I do believe he will win if we don’t give an inch and if we are as focused and relentless as the other side is”