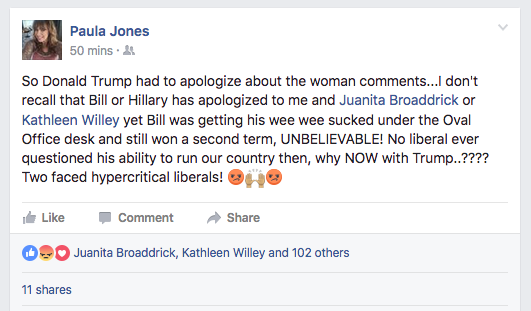 Several alleged victims of former US President Bill Clinton have come forward to defend Republican presidential candidate Donald Trump after leaked audio emerged Friday of a controversial conversation the businessman had in 2005.


Juanita Broaddrick on Saturday morning remarked that Trump’s bad words didn’t affect her as much as Bill Clinton’s rape and Hillary’s subsequent cover-up.

How many times must it be said? Actions speak louder than words. DT said bad things!HRC threatened me after BC raped me.

“How many times must it be said? Actions speak louder than words,” Broaddrick wrote on Twitter. “DT said bad things! HRC threatened me after BC raped me.”

Hillary calls Trump's remarks "horrific" while she lives with and protects a "Rapist". Her actions are horrific.

The former nursing home administrator accused Bill Clinton, then running for Arkansas governor, of raping her in 1978.

I was 35 years old when Bill Clinton, Ark. Attorney General raped me and Hillary tried to silence me. I am now 73….it never goes away.

Broaddrick described the incident in a 1999 interview with NBC.

“Then he tries to kiss me again. And the second time he tries to kiss me he starts biting my lip … He starts to, um, bite on my top lip and I tried to pull away from him. And then he forces me down on the bed. And I just was very frightened, and I tried to get away from him and I told him ‘No,’ that I didn’t want this to happen but he wouldn’t listen to me. … It was a real panicky, panicky situation. I was even to the point where I was getting very noisy, you know, yelling to ‘Please stop.’ And that’s when he pressed down on my right shoulder and he would bite my lip. … When everything was over with, he got up and straightened himself, and I was crying at the moment and he walks to the door, and calmly puts on his sunglasses. And before he goes out the door he says ‘You better get some ice on that.’ And he turned and went out the door.”

Broaddrick’s support for Trump was later reinforced by Paula Jones, another woman who claimed Bill Clinton had sexually assaulted her, ultimately leading to his White House impeachment. Clinton later paid an out-of-court settlement to the tune of $850,000 for Jones to drop the charges.

Jones on Saturday pointed out in a Facebook post that unlike Trump, Hillary and Bill had not apologized for their treatment of Clinton rape accusers such as Kathleen Willey and Juanita Broaddrick.

“I don’t recall that Bill or Hillary has ever apologized to me and Juanita Broaddrick or Kathleen Willey yet Bill was getting his wee wee sucked under the Oval Office desk and still won a second term, UNBELIEVABLE!” Jones wrote, to which Broaddrick reportedly commented, “You go girl,” according to The American Mirror.

Kathleen Willey, a former White House aide who has also accused Bill Clinton of sexual assault, on Saturday also called on Hillary Clinton to resign for her mistreatment of Bill’s rape accusers.

The Hag has called us bimbos,sluts,trailer trash,whores,skanks. From one woman to her rapist's victims.When will u resign from ur campaign?

Yesterday The Washington Post published leaked audio from a lewd conversation about women Trump had with other men aboard an Access Hollywood bus in 2005.

In a rare apology, Trump issued a statement on the surreptitious recording Friday admitting, “I said it. I was wrong and I apologize.”

Here is my statement. pic.twitter.com/WAZiGoQqMQ

“I’ve said and done things I regret, and the words released today on this more-than-a-decade-old video are one of them,” Mr. Trump stated, adding, “Anyone who knows me knows these words don’t reflect who I am.”

In a precursor to what he may touch on at the upcoming presidential debate, Trump turned attention to Bill Clinton’s history with women and Hillary’s enabling.

“Hillary Clinton and her kind have run our country into the ground,” Mr. Trump said. “I’ve said some foolish things, but there’s a big difference between the words and actions of other people. Bill Clinton has actually abused women, and Hillary has bullied, attacked, shamed and intimidated his victims.”

Watch Paul Watson’s break down of how Hillary Clinton smeared a 12-year-old rape victim and successfully defended a child rapist during her time as a lawyer: