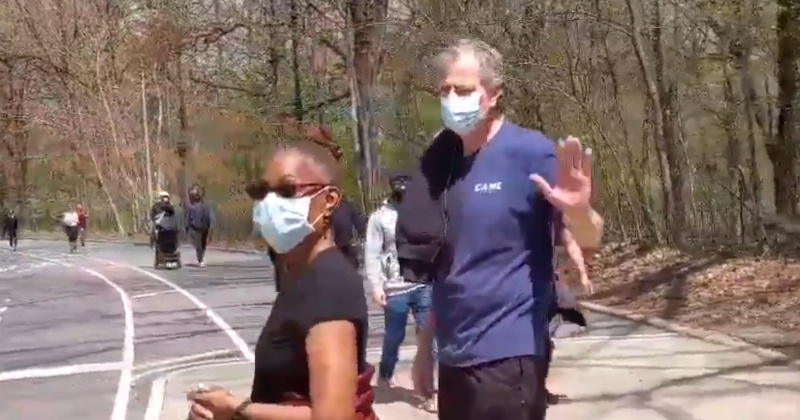 Ethics or strict lockdown rules did not prevent New York City Mayor Bill de Blasio from traveling from Manhattan to Brooklyn to soak up some sunshine with his wife, or from appointing her ‘equity and racial inclusion’ overseer.

“New Yorkers are doing a great job with social distancing but we know warmer weather will bring real challenges,” the tone-deaf De Blasio tweeted on Monday, announcing that the city council is working “to create more open streets for New Yorkers to enjoy safely.”

Even as Hizzoner was tweeting this, a video showing himself and his wife failing that “challenge” was circulating on social media.

De Blasio and NYC ‘First Lady’ Chirlane McCray were spotted in Brooklyn’s Prospect Park on Saturday – and confronted by a New Yorker angry that they’re traveling between the boroughs while millions of others are stuck at home.

"Seriously, you guys have a park. You live in the middle of a park. You don’t need to non-essentially travel to Brooklyn. "https://t.co/kyBbD5R1vT pic.twitter.com/c6krYkfvPS

“Seriously, you guys have a park. You live in the middle of a park. You don’t need to non-essentially travel to Brooklyn,” the man named Darren Goldner tells the city’s first couple, referring to the Carl Schurz Park near their Gracie Mansion residence in Manhattan – 11 miles away.

“This is so terribly selfish. You call yourself a progressive, but you chauffeur yourself to Brooklyn. You force people to drive you.”

De Blasio was apparently unfazed by criticism. On Sunday, he appointed Cray chairwoman of the city’s task force on “racial inclusion and equity.” Her job will be to “fight the coronavirus in the communities of color that are being hit the hardest,” according to a BuzzFeed op-ed the pair published on Monday.

“Coronavirus is the Great Equalizer.”

How many times did we hear that in the early days of this crisis? But it’s not true. COVID-19 does discriminate.

McCray’s sole qualifications for the post appears to be that she’s African-American, married to the mayor, and already in charge of ThriveNYC, the city’s mental health program with a $250 million annual budget, criticized by auditors for spending only 12 percent of that funding for the intended purpose.

As the coronavirus outbreak cut a swath through his city, De Blasio went from insisting everyone should “go on with your lives” (March 11) to blaming the federal government for a medical apocalypse.

New York City and its suburban counties have accounted for the lion’s share of US coronavirus fatalities – 17,515 deaths out of the 55,735 nationally, as of Monday morning.

As dire as those numbers may be, the US Navy medical ship dispatched to the city has since departed unused, and the hospital built by the Army inside the Javits convention center met the same fate.

De Blasio and Governor Andrew Cuomo continue to insist that the lockdown needs to be extended. Just last week, the mayor even talked about arranging the July 4 celebrations without crowds – getting roasted even by fellow Democrats for ignoring the plight of New Yorkers who are running out of rent money due to the shutdown.