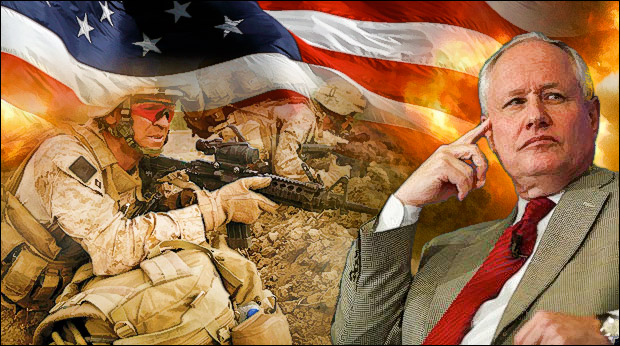 Neocon big leaguer, William Kristol, has come out with another doozy of an op-ed for the Weekly Standard, the neocon redoubt Kristol edits that has consistently lost around a million dollars a year since its inception in 1995.

This time around, Bill glamorizes the War to End All Wars, the First World War. He laments the “gravitational pull toward a posture of ironic passivity or fatalistic regret in the face of civilizational decline,” in other words the natural attitude of normal people to avoid war, largely because they inevitably pay the heavy price while a pampered intelligentsia hide out in their ivory towers.

Bill says the First World War engendered a “continuing deep if often indirect contribution to today’s demoralization of the West” because, as his buddy, the Canadian David Frum (inventor of the “axis of evil”) notes, it brought about a rejection of war despite the best efforts of the state to glorify and glamorize it.

As a student of the guru of neoconism, Leo Strauss, Bill Kristol knows what he’s doing, never mind the hackneyed prose or his disingenuous reliance on Francis Scott Key’s “The Star-Spangled Banner.”

Shadia Drury, a scholar and critic of Leo Strauss and his progeny, put the neocon deception into context during the Bush years and the heyday of neocon total war and mass destruction.

“Leo Strauss was a great believer in the efficacy and usefulness of lies in politics,” Drury told Danny Postel in 2003, soon after the neocon invasion of Iraq and its ultimate price of more than a million dead. “The idea that Strauss was a great defender of liberal democracy is laughable. I suppose that Strauss’s disciples consider it a noble lie. Yet many in the media have been gullible enough to believe it,” and continue to do so as the invasions of Libya (more than 30,000 slaughtered) and the ongoing mercenary war in Syria reveal.

Kristol is pandering to the masses, or rather the small slice bothering to read his loser magazine and its accompanying website. Neocons are once again on the march. They warn us histrionically about supposed dangers ahead, this time from a resurgent al-Qaeda in Iraq. In the process, Kristol intellectualizes a basic American patriotic icon, the national anthem, which is largely forgotten amidst the cultural degeneration he imagines. Bill does this in order to rekindle what is left of an urge to plunge headlong into endless war.

Neocons, after all, believe they are destined to rule and the rest of us to follow and, ultimately, if the propaganda is effective, those of us outside the Platonic cirlce will struggle to the death in never-ending war.

“On this perverse view of the world, if America fails to achieve her ‘national destiny,’ and is mired in perpetual war, then all is well. Man’s humanity, defined in terms of struggle to the death, is rescued from extinction,” Drury told Postel. “To my mind, this fascistic glorification of death and violence springs from a profound inability to celebrate life, joy, and the sheer thrill of existence.”