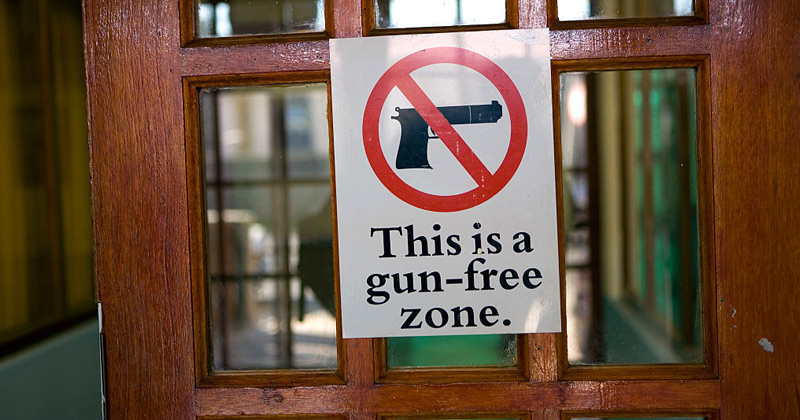 A Minnesota House rep. has introduced a new bill intended to hold “gun free zones” responsible for their patrons’ safety.

The new bill, House File 3051 introduced on Feb. 11 by District 23B Rep. Jeremy Munson, would make businesses that post “gun free zone” signs liable in the event a gun owner suffers a loss which could have been prevented by having their firearm.

“So this law simply says if you’re going to make people give up their right to self defense, then you must defend them and you must provide security and protect them,” Rep. Munson stated in an interview describing his bill.

Under the bill, property owners would “assume absolute custodial responsibility for the safety and defense of the unarmed person while the person is located on the owner’s or entity’s property that is posted with a sign prohibiting firearms.”

“The responsibility of the property owner or entity for the safety and defense of any person who is otherwise authorized to carry a firearm or who is not otherwise prohibited from carrying a firearm extends to the conduct of other invitees, trespassers, employees of the person or entity, vicious animals, wild animals, and defensible man-made and natural hazards,” reads a subsection of the bill.

Rep. Munson says the bill is necessary since businesses with “gun free zone” signs are basically advertising the fact that patrons are soft targets.

“A lot of people carry a gun for self defense,” says Munson, “and more and more businesses are putting ‘gun free zone’ signs on their business really as a way to market to people who don’t like guns. But in saying that it’s a gun free zone, they’re not actually creating a ‘gun free zone’ – they’re saying if you’re a law abiding citizen leave your gun in your car – but what they’re really creating is an environment where people can be targeted, because you’re giving up your right to self defense when you enter that building.”

Munson says while the bill may not pass all the legal hurdles required to become law, legislators should still look at doing something about the lack of safety in gun free zones.

“This really is a discussion we need to have in Minnesota about what gun free zones mean and how it’s really a false sense of security, and it’s actually in my opinion attracting bad actors to commit crimes in areas where they know the law abiding people aren’t able to defend themselves,” Munson says.

A Parkland shooting father who said “School safety now, gun control later” now has a plan for school safety. Will it work without a gun?