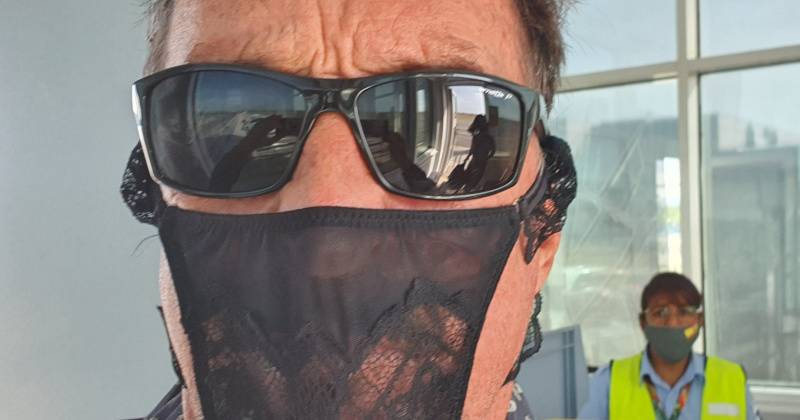 Billionaire John McAfee claims he was arrested in Norway for using a lace thong as a face mask.

The eccentric tycoon was planning to attend the “Red Scarf Society” in Munich, but then cancelled the meeting, tweeting about his detention and mocking coronavirus regulations.

Pictures of the fugitive American billionaire show him wearing black underwear on his face, which he refused to take off for his “health’s sake.”

“I am being detained in Norway. Trivial issue but waiting for high level beaurocrats [sic] to arrive. Slow b******s, as you know,” he wrote on Twitter.

I was jailed:
Why?
Visited Catalonia just before Europe banned Catalonians from travelling.

Tried to return to Germany and were refused entrance. They demanded we wear masks.

I put on my thong mask.

They demanded I replace it. I refused.

The billionaire’s wife Janice Dyson took over his account, describing the situation, and stressing that McAfee “was arrested for what he believes” and joking about possible ways for him to be released.

Going to have to cancel the Red Scarf Society meeting.

I am so sorry.

Always joke with you captors. No matter what. pic.twitter.com/aKgq65Fjqx

Later, the tycoon said he was released after 14 hours in jail and then travelled to Belarus.

McAfee, who is the founder of McAfee LLC and several other businesses, confronted law enforcement in various countries on multiple occasions. The fugitive tycoon claims he is wanted in the United States “as a criminal” for murder, money laundering, and tax evasion; however, he previously decided to run in the 2020 presidential election for the US Libertarian Party.