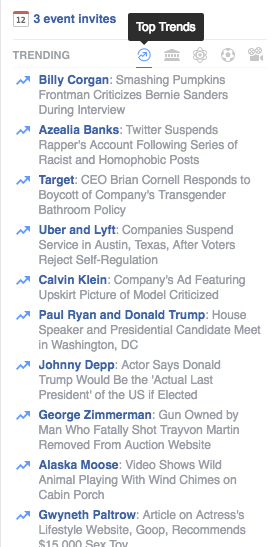 I can’t believe that we’re even having this discussion, if you can understand when I say that to you humbly. To be talking in America in 2016 about Mao is a good idea, and a socialist is running for president and that’s OK, and we’re going to go back to these crazy tax rates where we’re going to completely disempower the innovators in our country because the new technocratic class wants to keep their position and they want to keep anybody else from coming in the game… I mean, it’s just crazy to me.

News of the interview’s trending status comes only days after members of the Senate demanded answers from Facebook CEO Mark Zuckerberg over claims that conservative topics and news organizations were blacklisted from the site’s “trending news” section.

Widespread backlash from readers of conservative and alternative media has seemingly forced the company to alter its practices in order to allow legitimate trending topics to break through their electronic Berlin Wall.

The interview’s success not only highlights the growing and massive influence of the alternative media but exemplifies the public’s desire for populist and pro-American content.

Previous comments made by Corgan on the Alex Jones Show last month also made headlines after the musical icon decried the current state of free speech in relation to the rise of social justice politics.

Also watch our previous interview with Corgan on the Alex Jones Show:

Alex Jones and the Infowars crew discuss live on Facebook Mentions the video’s viral implications and the importance of challenging the status quo.