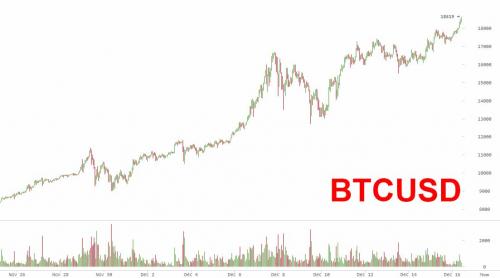 Having traded in a relatively narrow – for bitcoin – range of $16,500-$17,500 over the past week, the world’s most popular cryptocurrency jumped to new all time highs following the latest unexplained burst of buying out of Asia, with another Saturday surge in volumes emerging out of Japan and Korea. 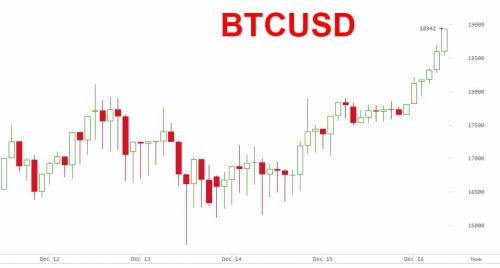 As a result of the latest burst higher, the market cap of bitcoin is now over $318 Billion; to fund the bitcoin spree, Ethereum, Litcoin and various other cryptos have seen some modest liquidation, and have not enjoyed Bitcoin’s latest dramatic ascent; as of Saturday morning, the total crypto space market cap was over $560 billion. 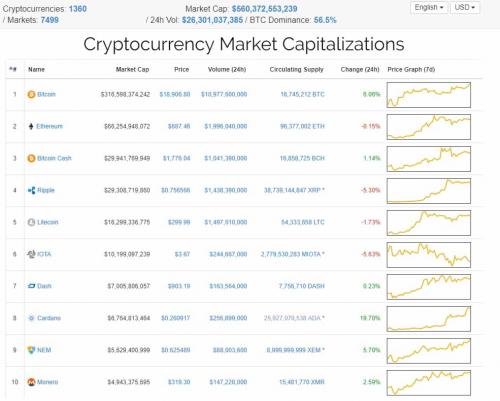 While bitcoin has added more 30% to its value in the past week, trading has been slightly calmer than the wild price swings the market has seen in recent weeks, with volatility lower since the launch of bitcoin futures from Cboe Global Markets on Sunday. Market-watchers said bitcoin’s price was being lifted by the launch of rival CME Group’s bitcoin futures contracts on Sunday.

“The hope (is) that futures signal the unlocking of institutional money into the digital arena and (that there will be) a rapid demand increase and ratification of the technology and its principles,” said Charles Hayter, founder of industry website Cryptocompare.

Still, outside of the crypto market, worries continue to grow about the amount of money piling into the space with the most vocal critics being those who have so far missed the entire move. Chief among them is A study by Anglia Ruskin University, Trinity College Dublin and Dublin City University released on Friday said bitcoin could pose a threat to the financial stability of traditional currencies and markets, something which Janet Yellen denied earlier this week.

“Our evidence finds that the price of Bitcoin has been artificially inflated by speculative investment, putting it in a bubble,” said Larisa Yarovaya, one of the report’s authors and a lecturer at Anglia Ruskin University. “Although bitcoin is not regulated by governments, it could still have a knock-on effect on traditional markets due to the interconnectedness of cryptocurrency markets with other financial assets.”

Well, of course bitcoin is a bubble: as we first showed last week, it’s now officially the biggest bubble in history, surpassing the “Tulip Mania” of the 17th century: 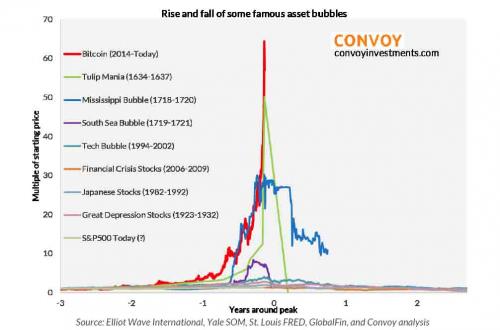 Meanwhile, for those who missed it, last week Deutsche Bank laid out who it believes is behind the relentless and dramatic surge in bitcoin:

So is “Mr. Watanabe’ proving more powerful than all the world’s central and commercial banks, and most of the world’s establishment economists, all soo desperate to shut down the “bitcoin bubble” to preserve faith in fiat currencies and traditional equity investments? Juding by the now daily record highs in the cryptocurrency, the answer – for now – is a resounding yes, which is clearly a benefit for all those who are still long the crypto such as this guy…

This may be the most San Francisco thing I have ever seen. pic.twitter.com/rU4RYNuTVg