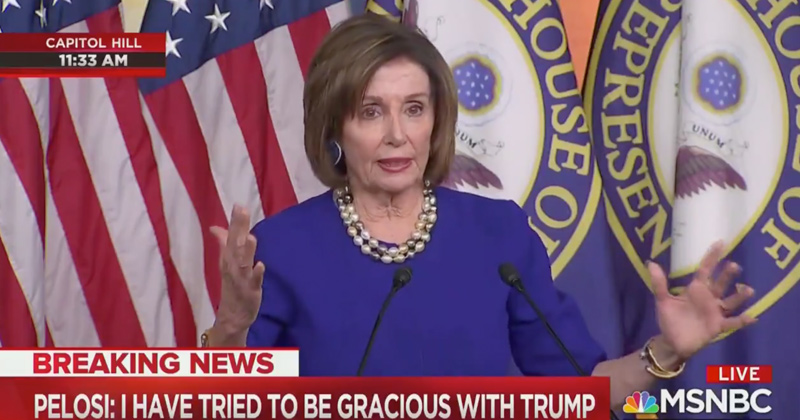 House Speaker Nancy Pelosi claimed President Trump appeared to be under the influence of drugs during his State of the Union Address Tuesday.

The California Democrat, who’s licking her wounds following the president’s acquittal Wednesday on impeachment charges, made the accusation during an interview Thursday after Trump’s speech at the annual congressional prayer breakfast.

Explaining a few of the awkward moments between her and POTUS caught on camera during the SOTU, Pelosi, 79, claimed she reached out to shake Trump’s hand as “an act of kindness,” because she noticed he seemed “sedated.”

“Again, I extended a hand of friendship to him to welcome him as the President of the United States to the people’s House,” she said, adding, “It was also an act of kindness, ’cause it looked to me like he was a little sedated – he looked that way last year, too.”

Pelosi later claimed the hand shake snub didn’t influence her decision to rip up her copy of the president’s speech at the end of his address.

“…He didn’t want to shake hands. That was that. That meant nothing to me. It had nothing to do with my tearing up,” she claimed.

Elsewhere in the interview, a reporter asked Pelosi if she believed tearing the speech was “dignified” or emblematic of Michelle Obama’s advice to take the “high ground.”

“Did you step on that message?” the reporter asked.

“No, I did not. No, I did not,” she answered, adding, “”I tore up a manifesto of mistruths…It was necessary to get the attention of the American people, to say this is not true…And I don’t need any lessons from anybody, especially the president of the United States, about dignity.”

The president took a subtle jab at Pelosi during the prayer breakfast Thursday, saying, “I don’t like people who use their faith as justification for doing what they know is wrong, nor do I like people who say ‘I pray for you’ when you know that is not so.”

During the impeachment trial, Pelosi had claimed she “prays for the president all the time.”

The Speaker’s latest claims could signal Democrats plan to shift focus back to questioning Trump’s mental health ahead of the upcoming election in November, now that the impeachment effort has gone down in flames.