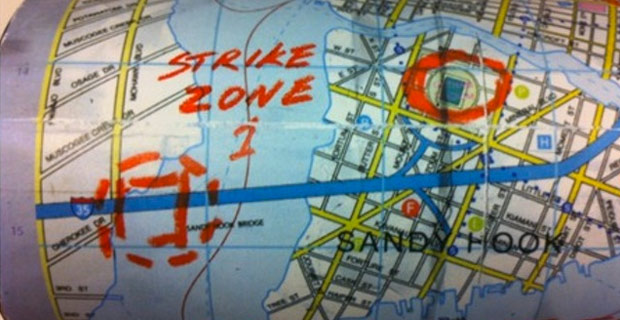 A curious theme running through several recent shootings seems to be a connection to the Batman comic book franchise, a coincidence which runs parallel with CIA mind-controlled assassins of the past being found with copies of the book The Catcher in the Rye.

A recent shooting in Las Vegas appears to be the work of two crazed Batman fans. The Facebook pages of Jerad and Amanda Miller, the two accused shooters who allegedly killed two police officers inside a Cici’s Pizza in Las Vegas, as well as a Walmart patron, are littered with photos of the married couple dressed as Batman villain The Joker and his love interest and criminal accomplice Harley Quinn.

Similarly, on July 20, 2012, James Holmes walked into a theater in Aurora, Colorado, and threw smoke grenades into an audience before unloading a hail of bullets, killing 12 people. Patrons had flocked to watch the latest Batman flick, “The Dark Knight Rises,” and many publications claimed Holmes painted his hair red as a reference to the Joker in a scene from “The Dark Knight.”

After the shooting, multiple witnesses claimed they saw accomplices aid Holmes, and once incarcerated, an inmate housed with the accused shooter claimed Holmes complained about an “evil” therapist who had “programmed” him to kill.

Holmes was also linked to DARPA-funded research into neuroscience programs at the University of Colorado Anschutz Medical Campus in Denver, and while attending the Salk Institute of Biological Studies in San Diego, he also designed a computer program using flicker fusion, a science examining how light flicker rates affect human behavior.

Following the Sandy Hook school shootings, which a multitude of people perceive to have been staged, the Batman theme was revisited after Internet sleuths found a map in “The Dark Knight Rises” referenced the words “Sandy Hook.”

Infowars confirmed the rumor and also found the map in question had been altered from previous versions appearing in the recent Christopher Nolan-directed Batman films to include Sandy Hook.

Further investigation found 46-year-old Scott Getzinger, listed as the prop master for “The Dark Knight Rises” film on IMDB, died in a head-on collision on April 6, 2012, prior to the film’s release. In the film industry, a prop master is responsible for all things props, including maps.

Besides the obvious Batman connection, another running theme through some of these past shootings seems to be Sandy Hook or Newtown, Conn. An additional anomaly is that Getzinger was a resident of Newtown.

Suzanne Collins, the author of the Hunger Games, is also a famous Newtown resident, and two weeks ago, Elliot Rodger, the son of the Assistant Director of the movie series based off Collins’ books, also carried out a mass shooting.

The frequent references to the Batman franchise, a fictional work designed to sympathize the masses to the plight of humanitarian billionaire playboys, like Bruce Wayne, and the odd Sandy Hook connections are similar to how several past assassins, including Lee Harvey Oswald, were found with copies of the novel The Catcher in the Rye.

“After Mark David Chapman shot and killed John Lennon, he calmly opened up Catcher in the Rye and proceeded to read it — before being apprehended,” wrote blogger Atomic Poet. “John Hinckley, the man who attempted to kill Ronald Reagan, also was in possession of the book. It is also alleged Lee Harvey Oswald was quite fond of the book, though this is disputed.”

The lawyer of Sirhan Sirhan, the alleged assassin of statesman Robert F. Kennedy, has also contended his client was likely a brainwashed patsy.

“There was no way Sirhan Sirhan killed Kennedy,” Sirhan’s lawyer, Larry Teeter, said according to the London Independent. “He was the fall guy. His job was to get busted while the trigger man walked out. He wasn’t consciously involved in any plot. He was a patsy. He was unconscious and unaware of what was happening – he was the true Manchurian Candidate.”

World-renowned British hypnotist Derren Brown also dedicated an entire episode of his series The Experiments to figuring out if it is possible to ingrain different triggers into someone’s mind and have them unknowingly carry out an assassination. Unsurprisingly, Brown succeeded in getting a candidate to “shoot” actor Stephen Frye.

Programming people to carry out misdeeds via downplayed brainwashing techniques is the CIA’s standard M.O.

Since the illegal MK-ULTRA experiments of the 1950s, testing which began in Nazi internment camps in Germany, the CIA has used members of the public to test the effects of hallucinogens and other drugs such as LSD to control human behavior. Many believe the program is still ongoing. Alleged Boston Marathon bomber Tamerlan Tsarnaev also believed he was brainwashed to react on a trigger phrase, according to the Boston Globe.

Considering the government’s known history in conducting mind control experiments, it’s feasible to contemplate the CIA has revamped their use of “Catcher in the Rye” as a trigger for assassination and has moved on to a more contemporary model, using the Batman franchise and the Joker as a template to trigger weak minded individuals into imagining they’re comic book villains playing out fictitious events.