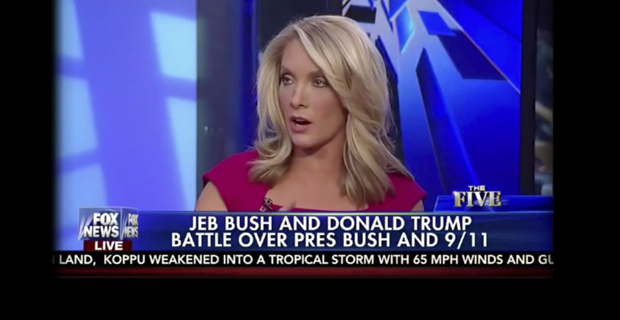 “Well, I think it was a dismal weekend when you have liberal conspiracy theories being introduced by the Republican frontrunner,” she said on Fox’s The Five. “It is soft trutherism, it is what it is like soft racism and soft bigotry.”

“You put it out there for a reason because you want to be provocative.”

Perino was referring to Trump’s appearance on CNN’s New Day on which he said the Bush administration was given advanced warning on 9/11 but did nothing about it.

“They did know it was coming,” Trump said. “George Tenet, the head of the CIA, told them it was coming, so they did have advanced notice.”

“They said that our country was safe under Bush. Well, what about the World Trade Center coming down in the worst attack in history?”

So, according to Perino, pointing out Bush’s questionable response to 9/11 makes Trump a ‘liberal conspiracy theorist.’

That’s a new one. Notice how she’s preying on the ignorance of her audience by claiming that anyone who questions the Bush administration’s handling of 9/11 is a “liberal” when in fact most of that criticism comes from libertarians and conservatives.

And also notice how she’s trying to claim that it’s “racist” to question the government’s official story on 9/11, which of course doesn’t make sense.

This is the kind of mind games the establishment media plays in their attempts to control both the narrative and reality.

“She’s also not doing Jeb any favors here,” Briane K. said on Mediate.com. “She’s just visibly showing that she is protecting the Bushes in which many conservatives cannot stand.”