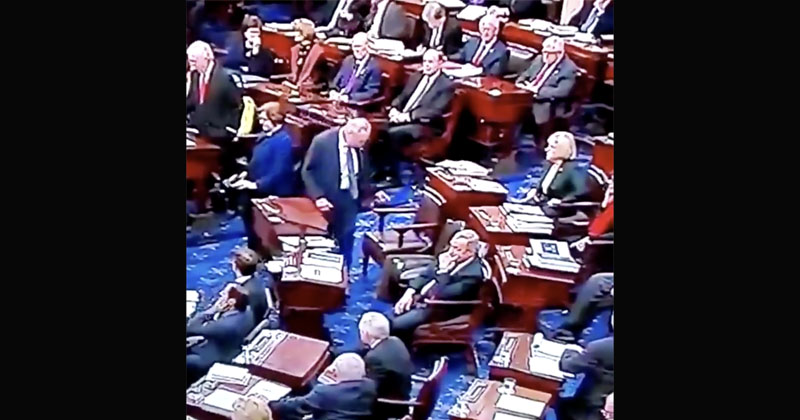 Senate Minority Leader Chuck Schumer was caught in a strange moment on the Senate floor Wednesday, where he appeared to tell somebody who wasn’t there to get out of his chair.

Footage from the Senate impeachment trial shows Schumer approach his empty chair before beckoning someone or something to leave for him to take a seat.

I have a question, is this Chuck Schumer and did he tell an invisible person to get off his chair?

I zoomed in so you guys could see better. Look at the blonde lady behind him, she looks confused. 🤔 pic.twitter.com/HasrZjFibl

Social media users had their own theories about the incident.

Former Army Lt. Col. Tony Shaffer joked Schumer was communicating with the devil to “get his ass out of the chair.”

A rare moment caught on video – @SenSchumer‘s direct interaction with Satan himself – here he tells the Prince of Darkness to move his ass out of Schumer’s seat on the Senate floor… https://t.co/h3s16kHsZp

Here’s video of Chuck Schumer telling the ghost of Robert Byrd to get out of his chair. https://t.co/lUa6ruBKvZ

⁦@charliekirk11⁩ hey did you see this. Nancy’s senial ways are rubbing off on Chuck. This is a prime example of term limits. https://t.co/FOzkvEoTU8

He’s not the only Democrat leader who appears to lose it.

Over the years, House Speaker Nancy Pelosi has repeatedly slurred and stumbled over her words and babbled nonsensically during many press briefings.

Here’s just one example of Pelosi stammering incoherently tweeted out by President Trump last May:

Pelosi even slurred and stumbled just last week during a press conference about impeachment.

When it comes to the Democrat leadership, they’re not sending their best.