The death of a sheriff’s deputy at the hands of a black man last week prompted a Texas resident to craft a special message to the Commander in Chief, pleading him to denounce the divisive Black Lives Matter movement.

In a video posted to Facebook Saturday, Evans, a member of the Jefferson County Republican Party, says the solution to stopping the senseless violence involves more than just reconsidering mental health screenings or restricting the Second Amendment.

“I think we should start by denouncing the ‘Black Lives Matter’ movement,” Evans asserts, adding that “It’s a racist movement, racist to the core, and it’s only caused more division, more hate among Americans.”

“I challenge every leader, starting with the President, down to myself, to denounce the #BlackLivesMatter movement,” Evans says.

“What happened last night was a senseless act of violence,” adds Evans. “Any time you openly have a group of people making it their point to say that their lives are better than another group of people’s lives, you set yourself up for this type of stuff.”

Evans, like other activists, is calling on people to unite under the inclusive banner of “All Lives Matter, so we can understand that everyone’s life is precious.”

“We’ve managed to devalue life for some reason lately and these organizers win because of it,” Evans says.”Let’s stand united. Denounce that movement.” 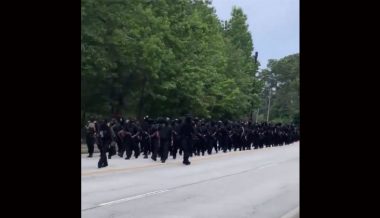